Kathy Griffin Cuts Her Own Head Off! 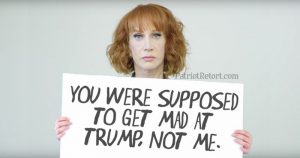 D-List Celebrity Kathy Griffin seems to be attempting to worm her way back into the public conscience just a few months after being shunned for disgusting faux-beheading of President Trump.

Obviously this chick will do anything to get attention.

You may remember in the days after her “joke” she made the rounds tearfully apologizing for her bad judgment, promising anyone who would listen that she realized how disgusting what she’d done was.

We all knew she was lying, and now she’s proving us right.

“I am no longer sorry, the whole outrage was B.S., the whole thing got so blown out of proportion and I lost everybody,” Griffin said. “I have been through the mill.”

Oh, Boo-Hoo, Kathy. No one feels sorry for you catching hell because of your horrible sense of “humor.” No one.

Watch as Griffin battles an Australian news anchor who obviously still has a sense of propriety and can’t believe what she’s hearing from the deplorable Griffin.

When anchor Sam Armytage presses Griffin and reminds her about how ugly the stunt was, Griffin lashes out and, of course, starts blaming President Trump… as if it was his fault that she was mocking him.

“No, you’re full of crap. Stop acting like my little picture is more important than talking about the actual atrocities that the president of the United States is committing.”

Being more aggressive in trade negotiations with China?

Having our law enforcement agencies actually enforce our laws?

It’s pretty easy to see what Griffin is doing here.

President Trump is hated on the left and Kathy Griffin can tell that she’s never going to have any fans on the right ever again, so she’s willing to burn those bridges in an effort to win new fans on the left.

The worst part about all of this, is that she’s probably right. She can probably salvage some of her career by winning over a few random lefties and getting them to subsidize her talentless career.

You can see the whole interview below: