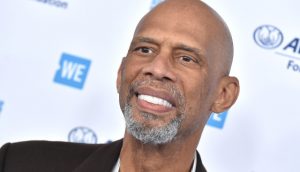 Former basketball star Kareem Abdul Jabbar is issuing a call for Big Tech social media companies to slap a muzzle on those pesky barking celebrity conservatives, because, you know, they aren’t on board with progressive groupthink.

Abdul-Jabbar made his case for this in a long op-ed that was published in The Hollywood Reporter, saying conservative celebrities are doing a lot of harm to society, therefore, their rights should be stripped away.

“Few are more beloved than J.K. Rowling, whose Harry Potter books make up the best-selling series in history. Yet her anti-trans tweets may not only damage the Potter and Fantastic Beasts franchises, they could end up tainting her entire literary legacy,” argued Abdul-Jabbar. “Even the stars of the movies — Daniel Radcliffe, Emma Watson, Rupert Grint and Eddie Redmayne — have spoken out against her position. John Cleese’s tone-deaf defense of Rowling left many fans bitterly disappointed, tarnishing his reputation.”

“It would be tempting to dismiss this self-mutilation as merely the triggering of overly sensitive ‘cancel culture.’ But some of this public braying does immediate harm to the foundation of society,” he continued. “Giuliani’s attacks on the integrity of the 2020 elections, without any substantive evidence, has undermined the democratic process. A post-election poll indicated that 77 percent of Republicans think Joe Biden won because of fraud. Since no credible proof has ever been shown, this opinion can only be held because they practice flat-earther, anti-vaxxer cult-think: Someone in authority told me what I want to hear, so it must be true.”

To those who would charge Abdul-Jabbar with the same crime, given his own celebrity status, he countered that by saying he has “been writing books and articles about history, culture, and politics for 30 years to establish” his credibility.

The former NBA player said that he appreciates the steps currently being taken by social media giants to place warning labels on these individuals’ statements, but also thinks they aren’t going far enough.

“Social media companies have begun slapping warnings on some messages that are false, incite violence or cause harm to society,” Abdul-Jabbar wrote. “But this needs to be done with more consistency and vigilance. Studies indicate that when readers see these warnings, they are less likely to read or believe things. However, as another study showed, there can be a backfire effect in which content that isn’t flagged, even when inaccurate, is perceived as true.”

“Many Americans imbue stars with political and social intelligence they just don’t have. Great success in one field can lead to the delusion that all your thoughts are great,” the former NBA star went on. “It doesn’t help to be surrounded by fawning people whose job it is to agree with everything you say. The irresponsibility of tweeting irrational and harmful opinions to millions, regardless of the damaging consequences to their country or people’s lives, proves that those stars deserve the harsh backlash.”

Hate to break it to Kareem Abdul-Jabbar, but these folks have rights. They can sway whatever they want, even if you vehemently disagree with it and consider the idea to be repulsive. Everyone has the right to speak their mind and share their beliefs. Right or left.

This is something that Abdul-Jabbar just doesn’t seem to understand. Most progressives don’t.