Kanye West Praises Emma Gonzales, But Progressives Are Already Done With Him 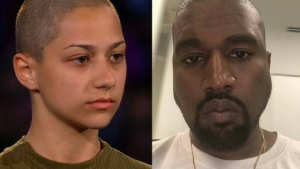 Kanye West has been known for his goofy behavior and even goofier tweets for as long as he’s been in the public eye.

Remember, this is the guy who mortified poor Mike Meyers on national television by claiming “George Bush doesn’t care about black people” during a Hurricane Katrina relief telethon back in 2005.

Of course, back then, liberals heartily agreed, because he was just parroting the “all-republicans-are-racist/sexist/homophobic” narrative that is the bread and butter of the Democratic party’s recruitment strategy.

So it was certainly gratifying for conservatives to see the heads explode when Kanye, who it should be noted is about to drop several new albums, ahem, took to Twitter to express his affection for President Trump and his “dragon energy”, whatever the heck that is.

It was easy to get swept up in the excitement that such a prominent pop culture icon actually dared suggest that he didn’t have to think like everyone else in the entertainment industry if he didn’t want to, but in the back of our heads, we were all thinking “yeah…but he’s still Kanye.”

To start with, basking in the media attention or perhaps as a sort of cryptic kowtow to his left-wing critics, Kanye posted a picture of Emma Gonzalez of Parkland fame, who has been leveraging her own survival of the Parkland shooting to rally against your Second Amendment rights.

“My hero” he captioned the tweet, later posting a picture of himself with a shaved head, saying it was inspired by Emma (?!?!)

Also, it is worth noting that an adult man with a wildly successful career and vast wealth finding a hero in a teenager who has been an ill-informed “activist” for all of five minutes is kind of silly, but again, that’s just Kanye!

In Kanye’s defense, however, despite the meltdowns from his progressive fans and the crude bashing from the media he received after donning his MAGA hat and saying he liked Trump on Twitter, he never really endorsed the president, but just advocated for “free thought.”

This is what he continues to do on his closely-watched Twitter timeline, although the progressives still don’t seem to get it. He wants to just, well, be Kanye, share whatever random thoughts he has, and not be tied down to any monolith way of thinking, which is perfectly fair.

It appears, however, that in the eyes of progressive America, you’re either with them are against them, and Kanye has officially expelled himself by his public expression of anything other than hatred for President Trump. The mainstream media was thrilled at Gonzalez’s passive aggressive reaction to Kanye’s tweet:

“Kanye West Calls Emma González His Hero and She Is Not Impressed” “Kanye West Tweets Admiration For Emma Gonzalez, But She Isn’t Having It” “Kanye West’s tweet championing Emma Gonzalez may not have landed as he’d hoped” gloated the headlines to Gonzalez’s snub of the pop superstar.

Kanye may be as erratic and borderline incoherent as ever, but he’s now learned the hard way what happens when you challenge mainstream narratives in the entertainment industry. Hopefully, his choice to break free from a tired paradigm will still inspire someone out there, preferably one who doesn’t admire a pint-sized gun-grabber!