Kamala Harris Starts To Question Medicare For All, Bernie Snaps 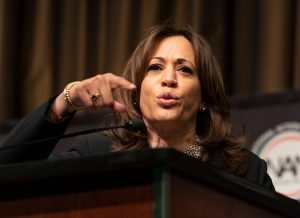 Either someone knocked Sen. Kamala Harris on the head real good on Friday night or she’s got another case of the flip-flops.

In statements to a gaggle of wealthy campaign donors in the Hamptons and at Martha’s Vineyard over the weekend, the 2020 Dem hopeful expressed that, of late, she has “not been comfortable” with the Medicare for All plan she co-sponsored with fellow contender Sen. Bernie Sanders.

“I believe in capitalism, but capitalism is not working for most people,” she told the deep-pocketed potential donors. “I think almost every member of the United States Senate who’s running for president, and many others, have signed on to a variety of plans in the Senate. And I have done the same. I support Medicare for All. But as you may have noticed, over the course of the many months, I’ve not been comfortable with Bernie’s plan, the Medicare-for-All plan.”

Well, that doesn’t make a lick of sense, but it sure ticked Comrade Sanders off. In a Monday night tweet, Sanders said:

I don't go to the Hamptons to raise money from billionaires. If I ever visited there, I would tell them the same thing I have said for the last 30 years: We must pass a Medicare for All system to guarantee affordable health care for all, not just for those who can afford it.

I mean, there’s a pretty big reason why you’re probably never going to get a dime out of billionaires, buddy, but I’ll let you figure it out for yourself.

According to The National Review, Joe Biden’s presidential campaign attacked the scheme just hours before his second primary debate of the race.

“Let’s clear up the confusion about Medicare for All. We have the facts,” the Biden campaign wrote on Twitter.

Let's clear up the confusion about Medicare for All. We have the facts:

❌Costs 30x more than @JoeBiden’s plan
❌Only fully paid for by raising middle class taxes
❌No option to keep your current insurance from your employer@JoeBiden has a better plan: https://t.co/9MWt84GzyT pic.twitter.com/04WTlXVyCd

“We can go down the road that Senator Sanders and Senator Warren want to take us, which is with bad policies like Medicare for All, free everything, and impossible promises that will turn off independent voters and get Trump re-elected,” former Maryland congressman John Delaney also said at the time.

Maybe all the public pressure Harris has been under to tease out all the unintended consequences of Medicare For All is finally paying off.

But, then again, could just be flip-flopping. Time will tell.