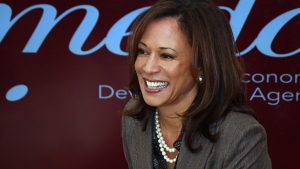 Sen. Kamala Harris is joining Democrats in their attempt to delay the confirmation of Brett Kavanaugh to the Supreme Court by backing his accuser and supporting her decision not to testify unless a full FBI investigation is to take place.

In fact, Harris said that she didn’t think Christine Blasey Ford should be “bullied” into testifying. In other words, the woman made a hard accusation against someone that could potentially destroy their career and family, yet they shouldn’t have to appear and back up their claim.

How is that NOT supposed to look fishy?

After accusing Supreme Court nominee Brett Kavanaugh of sexually assaulting her at a pool party 35 years ago when he was 17, alleged victim Christine Blasey Ford has now declined to testify under oath before the Senate unless the FBI thoroughly investigates her claims.

Given that Ford has provided no corroborating witnesses nor corroborating evidence and is unable to remember the time and place of the alleged crime, an investigation into her claims would be utterly futile. Also, the crime alleged is not a federal one, which means the FBI has no jurisdiction over it; an alleged assault 35 years ago at a pool party at an unknown house falls squarely into the hands of local authorities.

Not that those facts matter to Democrats like Kamala Harris, who are clearly using Ford’s non-committal to testify before the Senate as a means to delay Kavanaugh’s vote past the mid-term elections. On her Twitter account, Harris even said that Ford should not be “bullied” into testifying about an allegation that could destroy a man’s life.

“I support Dr. Blasey Ford’s request for an FBI background investigation before a hearing. She should not be bullied into participating in a biased process and we should not rush forward before facts are gathered,” tweeted Harris, who sits on the Judiciary Committee.

I support Dr. Blasey Ford’s request for an FBI background investigation before a hearing. She should not be bullied into participating in a biased process and we should not rush forward before facts are gathered.

Senate Judiciary Committee Chairman Chuck Grassley has already extended the invitation for Ford to testify under oath about her claims, which she has refused to do. In light of that, he’s rejected her call for an FBI investigation.

If she should refuse to appear and testify, they will move forward with the vote. If something really did happen, she has a perfect opportunity to get justice, right here, right now.

However, if it turns out she’s making all of this up and is simply trying to do this as a delay tactic, then shame on her.