Kamala Harris Pressed On Why She Hasn’t Visited Border, Says She Hasn’t ‘Been To Europe’ Either 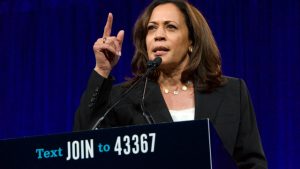 Vice President Kamala Harris was pressed about her decision not to visit the southern border, to which she responded with some snark saying that she hadn’t been to Europe either.

“We’re going to the border. We’ve been to the border,” Harris said during her interview with NBC News’s Lester Holt from Guatemala City where he asked whether or not she would be paying a visit to the U.S.-Mexico border. The reference to already having been there was not about herself but other Biden administration officials.

“Why not visit the border? Why not see what Americans are seeing in this crisis?” Holt asked the vice president.

“And I haven’t been to Europe,” she snarked. “I don’t understand the point that you’re making. I’m not discounting the importance of the border.”

Harris had acknowledged the need for a response amid a surge in the number of people attempting to cross the border illegally but said the scope of her focus was on the drivers of the influx of migrants.

“We have to deal with what’s happening on the border. There’s no question about that. That’s not a debatable point, but we have to understand that there’s a reason people are arriving at our border,” Harris went on to say.

“I care about what’s happening at the border,” she said.

Harris’s effort to define her diplomatic mission to stem migration to the southern U.S. border narrowly has frustrated lawmakers, Democrats and Republicans, who argue that the crisis is in the United States, where border states are dealing a continued spike in apprehensions.

Speaking to reporters in Guatemala City’s Palacio Nacional de la Cultura on Monday, Harris struck a blunter tone, stating that the border was closed and reiterating a position voiced by President Joe Biden earlier this year, telling people: “Do not to come.”

Some sort of action needs to be taken to end the crisis at the border. Believe it or not, this is the one area where the federal government absolutely needs to get involved. And go figure, it’s the one issue you can’t get them to stick their nose in.