Kaepernick Says He’ll Stand for the Anthem Now. Except there’s one BIG problem…. 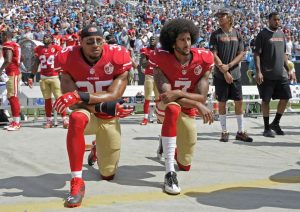 Colin Kaepernick is now saying that he wants to stand for the national anthem if an NFL team will give him a chance.  I guess his supposed outrage at the so-called treatment of blacks in America has its limits.  Fake protests for fake reasons rarely last.  Apparently Colin has started missing those million dollar paychecks, endorsements, and football and is willing to sacrifice his cause in order to get them back. What a….. you fill in the blank.

Colin Kaepernick, the former 49ers quarterback who started the protest of kneeling during the national anthem before NFL games, told CBS he’ll stand during the anthem if given a chance to play in the NFL again.

The former quarterback, who has not yet been signed this season, spoke to CBS Sports off camera. CBS reporter Jason La Canfora says Kaepernick is working out daily at a sports facility in New Jersey with the expectation or hope that a NFL team will sign him.

Kaepernick began his silent protest of kneeling during the anthem when he was playing in the 2016 preseason for the San Francisco 49ers. He told the media he was protesting against the treatment of blacks in the United States.

Remember Kap’s original statements regarding the protests?  Here’s a refresher:

“I am not going to stand up to show pride in a flag for a country that oppresses black people and people of color.”

“To me, this is bigger than football and it would be selfish on my part to look the other way. There are bodies in the street and people getting paid leave and getting away with murder.”

His references were in regards to things such as “police brutality against blacks” although verified statistics demonstrate that a police officer has an 18.5 times more likely chance of being shot by a black person than the other way around.  So it looks like he’s sacrificed his fame, career, and income for a cause that simply doesn’t exist on the level he, and so many others, have tried to communicate.

Personally, I hope he stays on the couch watching football at home. So long Colin Keapernick.  You betrayed your country, your league, and now, the ones that continue in the protest you started and are now giving up.  Maybe you can get a job at ESPN spouting more liberal lies and rhetoric.