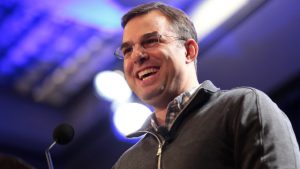 Michigan Rep. Justin Amash, who has been a very vocal critic of President Trump and even went so far as to jump on the “impeach Trump” bandwagon, has announced that he’s officially leaving the Republican Party.

I’m sure the guy’s really going to be missed. You can almost hear the bawling from other GOP members now, with the sweet, melancholy sounds of a funeral dirge playing in the background.

In other words, bye, Felicia.

Amash, an outspoken Trump critic, announced his departure from the party in a Thursday op-ed for the Washington Post.

In the piece titled “Our politics is in a partisan death spiral. That’s why I’m leaving the GOP,” Amash said he finds the current state of party politics frightening for the nation and a threat to everything the U.S. stands for.

“In recent years … I’ve become disenchanted with party politics and frightened by what I see from it,” he wrote. “The two-party system has evolved into an existential threat to American principles and institutions.”

The Michigan congressman, who has been the lone House Republican to call for the impeachment of President Donald Trump, said he wants fellow lawmakers to join him in bowing out of “partisan loyalties and rhetoric.” He also left the conservative House Freedom Caucus in June.

In reality, maybe Amash didn’t really belong in the Republican Party from the get-go. He’s a libertarian. A pretty hardcore one. It’s not that there isn’t room for such folks in the party, it’s that there’s such a big gap between the conservative platform of the GOP and the principles espoused by libertarians, it’s rather difficult to reconcile the two.

Regardless, leaving the GOP, combined with his call to impeach Trump, is going to all but seal the deal on Amash not being re-elected. Independents rarely make a splash because our nation is so addicted to the two-party system.

It’ll be interesting to see how his re-election efforts go.