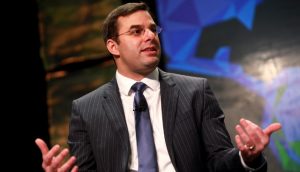 Rep. Justin Amash recently suggested that President Trump should be impeached and as a result of that statement has decided to leave the Freedom Caucus.

Amash’s comments were made a month ago on Twitter, which again, goes to show what happens when you have access to a forum where you can easily post something without giving it much thought. Politicians probably should stop tweeting so much.

On Monday, Amash told CNN about his departure.

“I have the highest regard for them and they’re my close friends,” he said. “I didn’t want to be a further distraction for the group.”

On May 18, Amash posted a series of tweets critical of Attorney General William Barr’s reading of Special Counsel Robert Mueller’s final report on whether the Trump campaign colluded with Russia to steal the 2016 election. In his first tweet, Amash stated his “principal conclusions”:

3. Partisanship has eroded our system of checks and balances.

4. Few members of Congress have read the report.

Amash continued his rant through more than a dozen tweets, giving his full views on the report itself, the conclusions that were reached by Barr and how he handled the report, plus the implications of all this for the president.

Tons of hardcore leftist actors, pundits, and activists immediately shared the posts and cheered on the GOP congressman for his statements.

When Hollywood actually backs your words, that’s probably a good indication you’ve somehow compromised your values. Either way, it’s definitely not a plus. Of course, had these folks done their homework and seen how Amash has voted and the things he’s stated on many of their pet issues, they’d probably drop their support immediately.

Amash is not the type of person who is a “party guy.” He’s sometimes not voted Republican on certain pieces of legislation, prompting some criticism from House Minority Leader Kevin McCarthy who said that Amash has voted “more with Nancy Pelosi than he ever votes with me. You could have a bill with 400 votes, all supporting it, there will always be one opposed and that is Justin Amash.”

Being a contrarian is sometimes necessary, but to do it just because, well that seems really silly.

Regardless, a lot of folks weren’t happy with the comments, including Sen. Rand Paul and fellow caucus member Rep. Jim Jordan.

Guess we’ll have to wait and see how negatively his comments impact his reelection efforts.