Just Weeks After Vowing To “Respect Personal Space,” Joe Biden Gets Handsy With A 10-Year-Old Girl 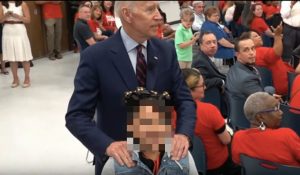 Joe Biden is once again demonstrating that he literally cannot keep his wrinkly mitts off of women and children. Impossible. Can’t stop, won’t stop.

Just a few short weeks ago, Uncle Joe suffered a moderate backlash for his well-past-creepy degree of handsiness and issued a tone-deaf apology video:

Social norms are changing. I understand that, and I’ve heard what these women are saying. Politics to me has always been about making connections, but I will be more mindful about respecting personal space in the future. That’s my responsibility and I will meet it. pic.twitter.com/Ya2mf5ODts

Apparently “the future” ain’t happened yet, or maybe the muscle memory with Biden’s shoulder-squeezers is just too powerful to overcome, because the dude has already been caught getting grabby with a 10-year-old girl at a recent rally.

After giving a speech to the American Federation of Teachers in Houston yesterday, Uncle Joe “did have one interaction that raised some eyebrows among online commentators,” according to the New York Times.

Nestled into their report of Biden’s education plan proffered to the teachers’ union, the Times included the fact that the man couldn’t keep his creepy hands and comments to himself when the little girl asked a question about today’s divisive political climate:

She told him that her favorite subject was journalism, so Mr. Biden proceeded to bring her to the back of the room, where journalists and TV cameras were congregated, and put his hands on her shoulders.

Washington Post national political reporter Felicia Sonmez, also present at the event, documented the incident in a series of tweets with a far healthier degree of accuracy and criticism than the Times seems capable of:

In a somewhat odd moment at tonight's AFT town hall, Biden tells a 10-year-old girl, “I’ll bet you’re as bright as you are good-looking." He takes her over to the assembled reporters, then stands behind her and puts his hands on her shoulders while he's talking.

Sonmez also provided a video of the incident, which just gets creepier and creepier as it progresses:

Listen, there’s a reason this kind of nonsense is only gonna fly in the Democrat camp. What do you think is going to happen if some 76-year-old man tries squeezing the shoulders of a 10-year-old girl and saying that kind of thing to her in a room full of red-voters? That dude ain’t gonna last long.

The true-blue establishment Dems are running out of reasons to keep propping up this guy. I can’t say I totally blame them, though, considering that their only other options are an ancient socialist and a gaggle of assorted extreme leftists who don’t stand a snowflake’s chance in hell at beating Trump.