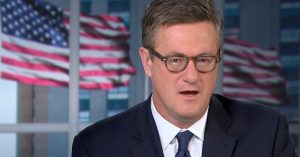 We’ve all gotten used to the larger-than-life criticism of Donald “Literally Hitler” Trump as his Presidency ticks along and the left still hasn’t managed to #Impeach45, but these comments are outrageous even for the most hysterical anti-Trump pundit.

“Morning Joe” host Joe Scarborough took to Twitter on the seventeenth anniversary of the 9/11 terror attacks to wax philosophical about how much worse for America Trump was than the death of 3000 Americans on that fateful day in 2001.

Let’s be real here: this is the rhetoric the left has embraced in the Trump era. He has become worse than literally everything bad that they could ever imagine. If there was an opposite of “idolatry”, that’s what this would be.

In a tweet promoting his new column for the Washington Post, Scarborough declared, “Trump is damaging the dream of America more than any terrorist attack ever could.”

The title of the column is equally unsubtle and shameless: “Trump is harming the dream of America more than any foreign adversary ever could,” writes Scarborough.

In the op-ed, Scarborough — once one of Trump’s biggest supporters — criticizes both President George W. Bush and President Barack Obama before taking aim at Trump.

“Sixteen years of strategic missteps have been followed by the maniacal moves of a man who has savaged America’s vital alliances, provided comfort to hostile foreign powers, attacked our intelligence and military communities, and lent a sympathetic ear to neo-Nazis and white supremacists across the globe,” Scarborough writes. “For those of us still believing that Islamic extremists hate America because of the freedoms we guarantee to all people, the gravest threat Trump poses to our national security is the damage done daily to America’s image.”

He concludes his article, published on the eve of 9/11, by encouraging people to vote: “The question for voters this fall is whether their country will move beyond this troubled chapter in history or whether they will continue supporting a politician who has done more damage to the dream of America than any foreign adversary ever could.”

My Latest—> Trump is damaging the dream of America more than any terrorist attack ever could. https://t.co/DEnYurEFmW

It was, of course, not long before he was taken to task on Twitter:

This is why I expose the left as un-American. @JoeNBC You forget what happened that day. 3000 Americans will never dream again, their families dreams still consist of nightmares. Today isn't about @realDonaldTrump or politics. It should be about unity. #NeverForget https://t.co/4YKdmUBtMa

I don’t care if you don’t like Trump and think he’s bad for our country. You owe an apology for this drivel to the thousands of families that lost loved ones 17 years ago today — and to every American, frankly. https://t.co/0gWSWgNQRt

One user, remembering the sober anniversary we honor today, had some very good advice:

Focus on the memories of those who sacrificed themselves to save others.