Juror For Smollett Case Comes Forward About Trial, Weighs In On Not-Guilty Verdict On One Of The Six Counts 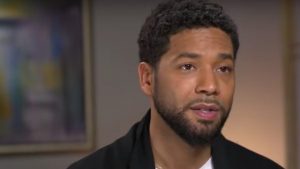 A juror who sat on the case of actor Jussie Smollett recently sat down with the Chicago Sun-Times told the news network that she believed the jury was doing Smollett a favor by finding him not guilty on one of the six counts of disorderly conduct he was charged with concerning the 2019 hate crime hoax.

The juror went on to say that the jury was somewhat confused on what, exactly, they were being asked to find Smollett guilty on the sixth count of disorderly conduct, stating that since they didn’t find the 39-year-old actor guilty on that one specific count, the juror felt like it was a “favor to Jussie.”

Here’s more from the Sun-Times via Daily Wire:

The jury in Jussie Smollett’s trial felt they were doing him “a favor” when they convicted the former “Empire” actor on five counts of disorderly conduct, but not a sixth, one of the jurors told the Sun-Times Friday.

The decision was one the jury struggled with, the juror said.

In the end, “we all thought we were doing Jussie a favor,” said the juror, who asked not to be named.

“We were told it was an aggravated battery because he said they were wearing a mask,” the juror went on to explain, adding that “in all [of Smollett’s] accounts of what happened, he mentioned a mask.”

The Sun-Times reported that this juror pointed out that “if prosecutors had charged all the battery counts the same.” Smollett would have probably been found guilty on all six counts of disorderly conduct.

The juror noted during the interview that the jury was reluctant to quickly find Smollett guilty on all counts, noting the actor’s elderly mother in the courtroom and the possibility that Smollett could serve time in prison.

“It wasn’t an easy decision,” she went on to say. “You’ve got the mother sitting there. You feel bad. We didn’t know what the penalty would be. Are we sending this guy to jail?”

“It was not evenly split, but there were some doubters,” the juror went on to say, adding, “I just hope that [Smollett and his legal team] know that we went in there with an open mind. I listened to both sides. We wanted to make sure that those who had doubts didn’t feel pressured.”

It appeared to the juror that Smollett’s defense attorney was “just shooting from the hip,” while prosecution seemed more convincing, she added.

Back in January 2019, Smollett claimed he was targeted and attacked by apparent supporters of then-President Donald Trump in an anti-gay, anti-black hate crime. His alleged attackers, whom he allegedly described as white males who yelled “This is MAGA country,” were brothers Abimbola and Olabinjo Osundairo. Notably, the brothers are both black men who knew the “Empire” star before the incident and have claimed Smollett orchestrated the “hoax.”

A jury found Smollett guilty on five counts of disorderly conduct last Thursday. As of this writing he has not been sentenced, though he’s facing the possibility of up to three years in prison for each count.