Juror Booted After Cracking A Joke During Kyle Rittenhouse Trial 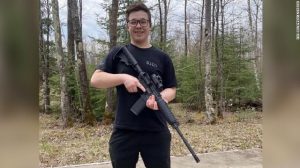 A juror in the trial of Kyle Rittenhouse was given the boot on Thursday after telling a joke to a deputy at the courthouse earlier that day.

Assistant District Attorney Thomas Binger spoke to the court and stated that his understanding of the was that it was something like, “Why did the Kenosha police shoot Jacob Blake seven times? Because they ran out of bullets.”

Pretty harsh joke, but was it really worth removing the juror? Well, the court must feel that this attempt at humor reveals a deep political bias that might impact the juror’s ability to reach a fair verdict.

Blake, a black man, was left paralyzed after he was shot seven times by a white Kenosha police officer in August of last year. The city devolved into rioting over the police shooting, during which Rittenhouse came to Kenosha with his gun to protect local businesses and ended up shooting three men.

The prosecutor said the prosecution disapproved of the joke and wanted the juror removed.

Judge Bruce Schroeder questioned the juror, an older white man who uses a scooter to move around, about the joke and asked him to repeat it, but he refused.

“It had nothing to do with the case,” the juror went on to say in his own defense. The juror was then dismissed from the jury, which leaves 19 jurors to hear the remainder of the Rittenhouse case.

Thursday marks the fourth day of the trial and the third day of testimony. The trial itself is expected to take anywhere from two to three weeks.

Rittenhouse has pled not guilty to charges of homicide and attempted homicide as well as unlawful possession of a weapon for shooting three people last year during riots in Kenosha, Wisconsin.

The young man’s lawyers are arguing that he fired his weapon in self-defense.

“Rittenhouse, now 18, went to Kenosha on August 25 last year when he was 17 with the intention of protecting businesses from looting and vandalism. He armed himself with a Smith & Wesson M&P15, which is an AR-15 style semi-automatic rifle that police say his friend illegally bought for him, as well as a medical kit,” the Daily Wire report said.

“On Thursday, jurors heard testimony from Richie McGinniss, the Daily Caller’s chief video editor, who was near Rittenhouse when he shot the first man, Joseph Rosenbaum, and tried to help Rosenbaum as he lay dying. Rosenbaum appeared in the footage to be chasing and gaining on Rittenhouse before he was shot,” the report continued.

Not long afterwards, Rittenhouse tripped and fell as protesters continued to chase him. While he was still on the ground, he fired a shot that fatally wounded another man, Anthony Huber, and then opened fire on a third individual, Gaige Grosskreutz, who was injured during the incident.

His lawyers argued, as they pointed to the video evidence, that protesters were violently assaulting Rittenhouse, kicking him in the face, attempting to take away his gun, and then stating that Huber hit him in the head with his skateboard.

“On Wednesday, the jury was shown more than a dozen videos of the shootings as well as the events leading up to and following the shootings. Some of the videos contained graphic content, including Rosenbaum bleeding on the ground and Grosskreutz screaming as his arm bled. Several jurors appeared visibly disturbed as they watched the videos,” the report noted.