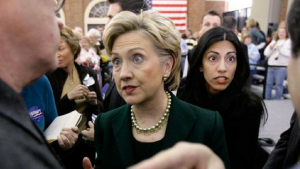 It is all too easy to let scandal die as key players fade from the limelight.

Despite the fact that Hillary Clinton’s political career crashed and burned gloriously in 2016, the glaring issue remains that she was most likely a severely corrupt Secretary of State who committed some serious crimes during her tenure at the State Department.

As attentions shift towards the great political reality show that is the Trump administration, a lot of people have been more than happy to sweep all that under the rug and shift their focus instead to the seemingly eternal Mueller investigation, which has yet to come up with anything even half as damning of what has been revealed about Clinton.

Well, Judicial Watch, the conservative watchdog group who relentlessly holds the federal government accountable for corruption and abuse of power, is not letting the Hillary email scandal die, and neither should we.

Judicial Watch announced a federal court ordered a hearing for Thursday, October 11, 2018, on a motion to compel testimony about the email practices of former Secretary of State Hillary Clinton. The order was issued by U.S. District Court Judge Emmet G. Sullivan.

The development comes in a Judicial Watch Freedom of Information Act (FOIA) lawsuit about the controversial employment status of Huma Abedin, former Deputy Chief of Staff to Clinton. The lawsuit, which seeks records regarding the authorization for Abedin to engage in outside employment while employed by the Department of State, was reopened because of revelations about the clintonemail.com system (Judicial Watch v. U.S. Department of State (No. 1:13-cv-01363)).

In 2016, Hillary Clinton was required to submit, under oath, written answers to Judicial Watch’s questions. Clinton objected to and refused to answer questions about the creation of her email system; her decision to use the system despite warnings from State Department cybersecurity officials; and the basis for her claim that the State Department had “90-95%” of her emails. Judge Sullivan is considering Judicial Watch’s motion to compel answers to these questions.

In her responses sent to Judicial Watch and the court on October 13, 2016, Clinton refused to answer three questions and responded that she “does not recall” 20 times concerning her non-government clintonemail.com email system. She preceded her responses by eight “general objections” and two “objections to definitions.” The words “object” or “objection” appear 84 times throughout the 23-page document submitted to the court and Judicial Watch.

The evidence continues to mount against the Comey FBI for their clearly botched investigation of the Clinton email scandal, and there have even been reports that dozens of FBI agents are ready and willing to testify to this.

Obama loves to brag about how his administration was “scandal-free”, but the more one goes digging around in the dark recesses of the federal government under his watch, the more evidence turns out that it was anything but scandal-free.

Regardless of what Trump is doing in office, it is absolutely imperative we hold these crooks accountable for the blatant corruption that has plagued Washington for far too long!