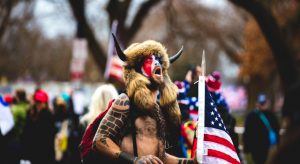 On Wednesday, the federal judge presiding over the case of the so-called “QAnon Shaman” due to his peculiar horned headdress has sentenced the man, known as Jacob Chansley, to 41 months in prison for his role in the Jan. 6 attack on the Capitol building.

The prosecutorial team actually wanted to see Chansley get a longer sentence, 51-months, but hey, we don’t always get what we want, do we?

Chansley pled guilty back in September to charges of obstructing an official proceeding when he, along with some others, stormed the Capitol building allegedly to stop Congress from certifying the results of the 2020 presidential election for Joe Biden.

The sentence Chansley received is similar to one handed down by a judge to a former mixed martial arts fighter who was busted on film punching out a police officer. He was also sentenced to 41-months in prison.

Lamberth went on to say he felt Chansley, who delivered a rather lengthy speech before being given his sentence, had done a lot of things to convince the court that he’s currently “on the right track.”

Chansley’s attorneys asked the judge for a sentence of time served for their client, who has been detained since his January arrest. He appeared in court in a dark green prison jumpsuit, with a beard and shaved head.

While in detention, Chansley was diagnosed by prison officials with transient schizophrenia, bipolar disorder, depression, and anxiety. When he entered his guilty plea, Chansley said he was disappointed Trump had not pardoned him.

Trump was impeached by the House of Representatives and acquitted by the Senate on a charge of inciting violent protest the Jan. 6 for a fiery speech that preceded it in which he told his followers to “fight like hell.”

Four people died during the violence that occurred on Jan. 6. Several police officers involved in the incident ended up killing themselves later on. Ashli Babbitt was shot by a Capitol police officer and another protester died after police seemingly pressed her into a crowd.