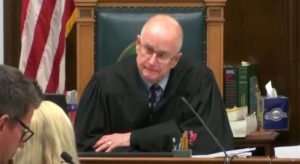 Judge Bruce Schroeder, the judge presiding over the Kyle Rittenhouse trial, has given MSNBC the boot from the courthouse for the rest of the proceedings after someone who represented the left-wing news network was caught following the jury’s bus Wednesday evening.

Schroeder informed those who were participating in the trial and those who were watching it of his decision while on the bench on Thursday morning, as the jury in the case began its third day of deliberations.

Rittenhouse, just 18-years-old, is being charged with killing two men and wounding another during the riots that took place in Kenosha, Wisconsin on Aug. 25, 2020. The so-called “demonstrations” that took place in the city at the time came after the police shooting of black man Jacob Blake who was left paralyzed from the waist down as a result of the altercation.

“I have instructed that no one from MSNBC News will be permitted in this building for the duration of this trial,” Schroeder stated in a video that was tweeted out by conservative outlet  the Daily Wire.

“This is a very serious matter and I don’t know what the ultimate truth of it is, but absolutely it would go without much thinking that someone who is following a jury bus … that is a very, extremely serious matter and will be referred to the proper authorities for further action,” the judge added.

“Last night, a freelancer received a traffic citation. While the traffic violation took place near the jury van, the freelancer never contacted or intended to contact the jurors during deliberations, and never photographed or intended to photograph them,” a statement from NBC News said, which was tweeted out by CNN anchor Brian Stelter.

“We regret the incident and will fully cooperate with the authorities on any investigation,” Stelter stated in another tweet.

Schroeder said that a person, who later identified himself as [producer] James Morrison of MSNBC, ran a red light while pursuing the jury bus from about a block away. Police stopped Morrison’s vehicle and ticketed the driver for “violating a control signal.”

“[Morrison] stated he had been instructed by [Irene Byon] in New York to follow the jury bus,” Schroeder went on to say. “The matter is under further investigation at this point.”

“Last night a person who is alleging to be affiliated with a national media outlet was briefly taken into custody and issued several traffic related citations. Police suspect this person was trying to photograph jurors. This incident is being investigated much further,” Kenosha Police Department shared on Twitter.

“There was no breach of security regarding the jury, nor were there any photographs obtained. This investigation remains active and open, no further information,” a follow-up tweet concerning the situation read.

Schroeder explained that the jury is transported “from a different location in a bus with windows covered so that they don’t have to look at any … aren’t exposed to any signs by one or side or another or interests in the case.”

Let’s hope we hear a verdict soon in this case and that Kyle Rittenhouse is found not guilty of murder, as the video evidence seems to prove he was merely protecting himself from violent leftists.