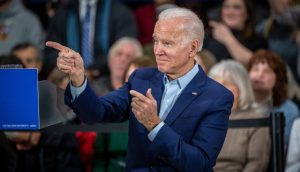 A judge announced on Thursday that a temporary restraining order that blocks President Joe Biden from being able to fire several unvaccinated federal employees, which includes active-duty military members named in the suit that is currently challenging the president’s vaccine mandate, calling it unconstitutional.

The plaintiffs in the case are seeking religious exemptions from the vaccine mandate put in place for federal workers which was announced back on September 9.

“None of the civilian employee plaintiffs will be subject to discipline while his or her request for a religious exception is pending,” Washington D.C. District Judge Colleen Kollar-Kotelly said, according to reports published by Fox News.

Judge Kollar-Kotelly’s ruling added that “active duty military plaintiffs, whose religious exception requests have been denied, will not be disciplined or separated during the pendency of their appeals.”

Politico and lawyer Jenna Ellis posted the ruling on Twitter on Thursday: “This is an amazing development from the DC District Court in the stand for OUR RIGHTS against the unconstitutional vaccine mandates,” she wrote.

“The court further ordered the defendants in the Biden administration to file a supplemental notice by noon on Friday that indicates whether they will agree that no plaintiff will be disciplined or terminated pending the court’s ruling,” Fox News pointed out.

Right after President Biden’s announcement about the vaccine mandate, the plaintiff’s attorney, Mike Yoder, made his own announcement.

“I will be immediately filing suit against [Joe Biden] regarding his [overboard] & unconstitutional vaccine mandate,” he said in a tweet.

“Your executive order may not be about freedom, but this lawsuit sure as hell is,” Yoder stated with passion.

I will be immediately filing suit against @JoeBiden regarding his overbroad & unconstitutional vaccine mandate.

Your executive order may not be about freedom, but this lawsuit sure as hell is

Just a single day before Yoder was to receive the temporary restraining order in his favor, he went off about the mandate online.

“Under Biden, exercising your religious freedoms will get your fired, for cause and you lose your benefits,” he went on to write. “But if you perjure yourself like FBI’s Andy McCabe, you’ll get a pension, $200,000 in backpay, & $500,000 worth of attorneys fees.”

Under Biden, exercising your religious freedoms will get your fired, for cause and you lose your benefits.

This is good news for anyone and everyone who values liberty. Our president doesn’t care at all about the fallout caused by his policies. That could be due to the fact that he’s a raging liberal, or because he doesn’t even know what he’s doing.

You know, with all of that possible cognitive decline going on.

Let’s hope more folks take a stand against these mandates and fight to restore liberty.