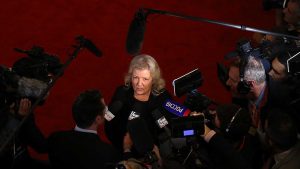 If Christine Ford is brave for testifying against Kavanaugh, Juanita Broaddrick is fearless.

This woman has been slammed and slandered by Democrats for decades, despite having a far more credible claim of suffering assault at the hands of a major political actor than Dr. Christine Blasey Ford, the Democrats heroine-du-jour.

So, Broaddrick, obviously enraged to see Ford’s story taken so seriously, decided to do something drastic to underscore the double-standard:

She showed up at the Kavanaugh hearings.

roaddrick addressed the media outside the Senate building where Kavanaugh’s Judiciary Committee hearing was set to take place. She said the accusations from Christine Blasey Ford, who claims Kavanaugh sexually assaulted her in 1982 at a boozy high school party, is “no comparison” to what happened to her.

“Because Dr. Ford has no evidence — I had the who, what, when, where and how and had five people that I told, not even counting the woman who found me 30 minutes after the rape with a swollen busted lip, torn clothes and in a state of shock,” Broaddrick said.

“How they can take these accusations and run with them, and laugh at mine for so many years is the biggest double standard I’ve ever seen,” she said. “It makes me angry that they left [Clinton] in office,” she said about Senate Democrats who rejected hearing her allegations.

Broaddrick, who has never once changed or backed down on her story and yet never been treated with any of the regard that Ford or her fellow accusers are right now, said she doesn’t even necessarily doubt Ford’s story.

“It’s not that I’ve decided, she hasn’t anything truly evidentiary to this point, how can she all of a sudden have something new to say today? She’s presented nothing,” she said.

But Broaddrick slammed the mantra “All women deserve to be believed.”

“All women are to be believed if they’re not conservatives and as long as the assault was not done by Democrats,” she said.