Journalist Tweets He Wants Covington Catholic Kids To Die. What Happens Next Is Sweet, Sweet Justice. 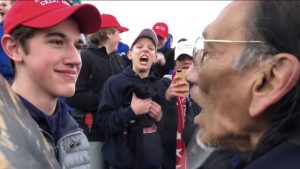 One journalist decided to let his hatred flag fly high in the sky concerning the latest fake outrage story perpetrated and deceptively reported on by the mainstream media, however, his choice to vent his emotions came with a heavy price.

Many on the left have called for violence against the students at Covington Catholic High School, who are at the center of a viral video controversy involving a Native American activist, but that’s not the case for one individual.

He’s been booted from his job.

A journalist who contributed to Vulture has been fired from his main job at INE Entertainment after he publicly wished for the Covington Catholic students and their parents “to die.”

“I don’t know what it says about me but I’ve truly lost the ability to articulate the hysterical rage, nausea, and heartache this makes me feel. I just want these people to die. Simple as that. Every single one of them. And their parents,” said on Saturday in a tweet.

“’Racism is in its Boomer death throes. It will die out with this younger generation!’ Look at the shit-eating grins on all those young white slugs’ faces. Just perverse pleasure at wielding a false dominion they’ve been taught their whole life was their divine right. F–ing die,” he added in a follow-up tweet.

INE Entertainment, where Abriss was a post-production supervisor, fired him after the tweets, according to TheWrap.

“We were surprised and upset to see the inflammatory and offensive rhetoric used on Erik Abriss’ Twitter account this weekend. He worked with the company in our post-production department and never as a writer,” the company said in a statement to TheWrap.

“While we appreciated his work, it is clear that he is no longer aligned with our company’s core values of respect and tolerance. Therefore, as of January 21, 2019, we have severed ties with Abriss,” the company added.

Abriss did not respond to an inquiry from TheWrap, but has since set his Twitter account to private. Even after his tweet was written about, he continued to smear the Covington Catholic students, calling them “MAGA chuds” and “racist.”

This guy is a real piece of work, isn’t he? His explosive diarrhea of the mouth got him canned, but it seems he hasn’t learned a darn thing from the experience.

The left are perpetually frustrated and angry that not everyone in the world sees things through their lens, and despite claims of tolerance, they are the most intolerant group of individuals you will ever come across.

The anger that seethes from them is disproportionate to much of what is going on in the world. This level of hate and hostility cannot be sustained long term. Sooner or later there will be a shift and these people will live depressed existences on the fringe of society.