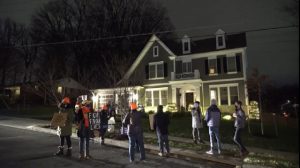 Sen. Josh Hawley’s wife, Erin M. Hawley, who is also a senior legal fellow at Independent Women’s Law Center, penned a piece that was published over at Fox News describing the harrowing assault on their family home.

But come on now, Mrs. Hawley. There’s now way the people who launched an assault on your home were liberals. They are far too tolerant for such a thing. Never, ever would leftists participate in violent activity….*sarcasm*

Erin M. Hawley recounts the evening when she was watching a movie with her then-seven-week-old daughter and “the sound of angry voices drowned out the TV.” She walked upstairs to find around 20 people protesting and “shouting through bullhorns” outside the house. After they refused to leave, she went downstairs only to return to find “at least three large men” blocking the porch and shouting “Come out, come out” into their bullhorns.

Fifteen minutes later, the police arrived and “informed the protesters that they were violating at least three laws.” The protesters left shortly after, but not before leaving signs on her lawn and chalk graffiti messages on the sidewalk. Before leaving, they warned they would “return morning, noon, and night.”

Hawley notes that this type of rhetoric has not disappeared from her family’s life, adding that “the protesters and others have accused my husband of overreacting and have referred to my family as ‘snowflakes.’ And a police department spokesperson (who was not on the scene) has since described the protest as ‘peaceful’ and a ‘minor’ incident.”

Hawley expresses how happy she is that her two young boys were out of town that night, saying, “they would have been terrified.” When the Senator’s wife was reconnected with the children, she took them to a friend’s house, them believing the change in plans was a “fun, surprise sleepover.”

Hawley went on to say that had her children remained at home, the whole incident would’ve had a much more negative, much more profound impact on them.

“And wasn’t that really the point? Why else would protestors come armed with bullhorns to a family home at dark? What other purpose to staging a night-time protest if not to terrorize the almost-certainly-to-be-home family?” She added.

Mrs. Hawley goes on to say that anyone can disagree with her husband’s policies or beliefs and states that holding public protests outside of an office building is “both appropriate and protected by the First Amendment.”

She said she believes that being able to disagree with others is “one of our most precious protections,” but also noted that the First Amendment is designed to help protect Americans from “harassment and to prescribe reasonable time, place, and manner restrictions on protest-like events.”

Rather than the protests outside their home being a moment of peaceful protest and disagreement where civilized dialogue transpired between different points of view, there was an “assault on our” home and “personal attacks on our family,” which do not fall under the category of civil discourse. Instead, they were designed to scare them.

However, despite the very traumatizing incident, Hawley is still clinging to hope for the future of our country, noting that friends and neighbors during the incident and after “scrubbed the sidewalk in the cold,” and invited her over to their homes. One neighbor actually left their home to come to Hawley’s aid, coming so quickly she didn’t even put shoes on.

Average American citizens who don’t have the mental illness of progressivism clouding their judgment are decent people. And that’s the vast majority of people out there. Don’t let the left convince you they are the majority. They aren’t.