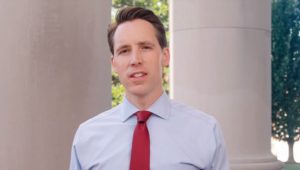 Sen. Josh Hawley has announced that he will object to the Electoral College certification when Congress meets in a joint session that is now scheduled for January 6.

This move gives House Republicans the one senator they needed in order to put a plan in motion that could see the current election results overturned and Trump declared victorious.

The announcement, shared to social media Wednesday morning, is sure to give President Trump a boost as he refuses to concede the race two months after Election Day over claims of election fraud.

“I will follow the same practice Democrat members of Congress have in years past and object during the certification process on January 6 to raise these critical issues,” Hawley said.

The senator from Missouri also said that he’d object to the certification because “some states, particularly Pennsylvania, failed to follow their own state election laws” and because of “the unprecedented effort of mega corporations, including Facebook and Twitter to interfere in this election, in support of Joe Biden.”

“At the very least, Congress should investigate allegations of voter fraud and adopt measures to secure the integrity of our elections,” Hawley said. “But Congress has so far failed to act.”

This is an interesting development that could cause some splintering in the Senate GOP, as Senate Majority Leader Mitch McConnell asked his colleagues not to challenge the election results, stating “the Electoral College has spoken.”

Rep. Mo Brooks from Alabama was the first member of the GOP to state his intentions to challenge the certification. He was soon followed by Reps. Jody Hice, Jim Jordan, and Rep.-elect Marjorie Taylor Greene.