John Podesta Gets Embarrased on Face the Nation 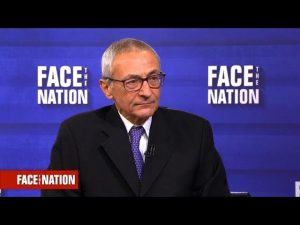 I think Johnny Podesta was expecting softball questions from the Clinton Broadcasting Service (CBS) during his recent appearance on Face the Nation.

Apparently that didn’t go as planned!

Former Hillary Clinton campaign manager John Podesta was asked an embarrassing question about the accusations that Russian interference helped tip the 2016 election to elect President Trump over his opponent.

Here is the video:

The Blaze’s Carlos Garcia gives the transcript below:

“How is it that these Russian operatives knew to focus on purple states like Michigan and Wisconsin and your campaign didn’t?” she asked.

“Well, Of course we spent a lot of time and energy and effort in all those states,” Podesta responded.

“Hillary Clinton herself did not spend much time in those states,” Cordes objected.

“You know we had Tim Kaine was there, [former President] Barack Obama was in,” he explained, “and she spent enormous time in Pennsylvania initially. And we spent a lot of effort, we had more staff in Wisconsin than even President Obama had in 2012.”

“But I think that begs the question,” he continued. “I think we focused on places we thought were, that were in contest, and at the end of the day we fell short in those states and I think that this active measures effort by the Russians could have tilted the election in Donald Trump’s favor.”

“But I think what the real issue is how he has reacted to it,” he claimed. “And in that context, if this is information warfare then I think he’s the first draft-dodger in the war.”

“He has done nothing but tried to undermine the Mueller investigation,” Podesta charged, “he hasn’t implemented the sanctions that were passed by the Congress and that he signed in reaction to the activities in the 2016 election. We learned this week, he’s ordered no effort to try to get the intelligence community to get together to try to prevent further activities in the 2018 election.”

Deputy Attorney General Rod Rosenstein said that there were no charges of Russian collusion in the indictments released against 13 persons who were involved in the Russian interference in the U.S.

Donald Trump won the election. Period! And with this type of embarrassing rhetoric it looks like he’ll win a second term with relative ease.