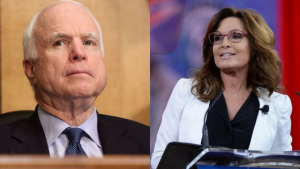 As John McCain battles what is likely to be a fatal case of brain cancer, he’s apparently decided to shake things up as much as he can, which one can certainly appreciate.

But as one of the most controversially RINO senators on Capitol Hill, he’s definitely ruffling some feathers with some of the things he’s reportedly putting in his forthcoming book, The Restless Wave.

One of the shocking revelations he has made is that he regrets picking Tea Party darling and bada$$ former Alaska state governor, Sarah Palin, as his running mate…and the former governor is quite hurt by this news.

“That’s not what Sen. McCain has told me all these years, as he’s apologized to me repeatedly for the people who ran his campaign – some who now staff MSNBC, the newsroom there, which tells you a lot,” she told Daily Mail.

She said that while hearing the news of the Senators alleged comments was “like a perpetual gut-punch”, considering what he’s always told her, she is not sure it’s really coming from him, but his inner circle.

“I attribute a lot of what we’re hearing and reading regarding McCain’s statements to his ghostwriter or ghostwriters,” she explained. “I don’t know all the details of his condition right now. It happens to me also where people speak for me and a bell is rung, and you can’t un-ring the bell.”

“I don’t know unless I heard it from Sen. McCain myself,” she added.

Palin had been a powerful force in the then-burgeoning Tea Party back in 2008, and many cynics on the right attributed her place in the campaign to an effort to rope in the vote of this new, outspoken faction.

But Palin reiterates that his apologies to her over the years for their loss has become so frequent, it’s almost “a running joke” between the former campaign partners, and that the Obama campaign was simply a formidable enemy.

“There were elements of a perfect storm for Barack Obama to have been elected. It worked out the way that it was supposed to work out,” she said.

This is a very graceful attitude from one classy lady!

Whatever McCain says in his book or does in Congress, our thoughts and prayers are certainly with the Senator and his family during this difficult time.