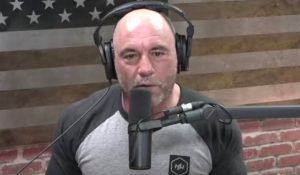 Podcast host Joe Rogan has made a return to stand up comedy this week, where he mocked listeners of his program who have based their beliefs about the coronavirus vaccine on his guidance.

There has been a growing list of content creators and popular musicians who have joined forces with Neil Young in boycotting streaming service Spotify as part of a protest concerning alleged misinformation about COVID being spread through episodes of the program where Rogan allowed medical professionals to share, what these musicians assert is “misinformation.”

“I talk s*** for a living — that’s why this is so baffling to me,” Rogan went on to quip Tuesday night in Austin, Texas, according to The Hollywood Reporter. “If you’re taking vaccine advice from me, is that really my fault?

“What dumb s*** were you about to do when my stupid idea sounded better? ‘You know that dude who made people eat animal ***** on TV? How does he feel about medicine?’ If you want my advice, don’t take my advice,” Rogan cracked.

Rogan, in his first announced appearance since becoming embroiled in controversy, also addressed his use of racial slurs in clips of episodes over a 12-year span.

“I used to say it if [I was talking about] a Richard Pryor bit or something, I would say it in context,” Rogan went on to say, according to The Hollywood Reporter. “Somebody made a compilation of every time I said that word over 14 years and they put it on YouTube, and it turned out that was racist as f***. Even to me! I’m me and I’m watching it saying, ‘Stop saying it!’ I put my cursor over the video and I’m like, ‘Four more minutes?!'”

“I haven’t used that word in years, but it’s kind of weird people will get really mad if you use that word and tweet about it on a phone that’s made by slaves,” as he then changed direction into a bit about overseas labor conditions.

During a post-show question-and-answer session, Rogan was asked if he would accept the $100 million offer from Rumble to move his show from Spotify.

“No, Spotify has hung in with me, inexplicably,” he replied, The Hollywood Reporter reported. “Let’s see what happens.”

On Tuesday of this week, Rogan referred to the controversies springing up about his program as a “political hit job.”

“In a lot of ways, this is a relief,” Rogan went on to say to his guest, comic Akaash Singh. “That video [of Rogan saying the N-word in his podcast over the years] had always been out there. This is a political hit job. They’re taking all this stuff I’ve ever said that’s wrong and smushing it all together. It’s good because it makes me address some stuff that I really wish wasn’t out there.”