Joe Manchin Tears Into AOC: ‘She’s More Active On Twitter Than Anything Else’ 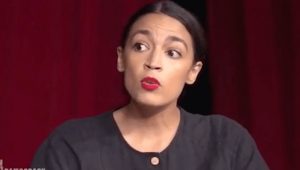 Despite the fact that the Democratic Party is experiencing a possible victory with Joe Biden being called the “president-elect” by a large swath of the mainstream media, it seems there’s a lot of internal strife threatening to tear them all apart from the inside out.

Nowhere is this more clearly seen at the moment than the battle heating up between Sen. Joe Manchin and Rep. Alexandria Ocasio-Cortez.

Manchin conducted an interview with the NY Times, which was published on Monday, in which the senator put the socialist congresswoman on blast, saying she’s far more active on Twitter than she is in Congress.

Ocasio-Cortez had fired back in a Nov. 12 tweet in which she posted a photo of herself seated behind Manchin at President Donald Trump’s State of the Union speech. In the photo, she appeared to be giving Manchin an icy stare as he applauded.

In the Tuesday interview with the Times, Manchin addressed the tweet, saying: “I guess she put the dagger stare on me. I don’t know the young lady — I really don’t. I never met her. I’m understanding she’s not that active with her bills or in committee. She’s more active on Twitter than anything else.”

A spokeswoman for the congresswoman, Lauren Hitt, came to AOC’s defense telling the newspaper that she has submitted more amendments than 90 percent of the other freshmen in Congress.

“The congresswoman has earned a reputation as a tough, prepared member in committee hearings,” Hitt said.

The left likes to pretend that they are all one big, happy family, but that could not be more untrue. Just like conservatives, there is lots of in-fighting between radicals and the more center-left establishment, each with vastly different core ideology, though they do share similarities on certain economic policies.

Much of the reason for AOC’s constant presence on Twitter is due to the fact that she’s young, idealistic, and understands that Congress isn’t her true mission. What she really wants to do is push her ideology and expose more young people to the ideals she holds dear.

Thus she’s using her role in Congress to build a social media platform where she can push out those ideas to large numbers of individuals.

Which is one more reason why she needs to be booted out.