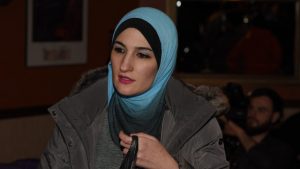 Democratic presidential nominee Joe Biden and his presidential campaign came out and strongly denounced having any ties with former Women’s March co-chair Linda Sarsour after she was seen participating in the Democratic National Convention.

Sarsour, along with her friend and fellow Women’s March organizer Tamika Mallory, were forced out of the organization after some concerns were raised after comments and statements by the pair were deemed anti-Semitic. Comments were made against Israel and word was getting around that Jewish activists were not being allowed to participate in the movement.

Kind of seems like the opposite of that tolerance we hear so much about from progressives, doesn’t it? Guess they are only tolerant of those who think the way they do.

“Joe Biden has been a strong supporter of Israel and a vehement opponent of anti-Semitism his entire life, and he obviously condemns her views and opposes BDS, as does the Democratic platform,” Biden campaign spokesman Andrew Bates said in a statement, referring to Sarsour. “She has no role in the Biden campaign whatsoever.”

The DNC platform, which was approved Tuesday, also condemns the BDS movement, while recognizing the rights of individuals who may feel otherwise.

The DNC platform, which was approved Tuesday, also condemns the BDS movement, while recognizing the rights of individuals who may feel otherwise.

Sarsour was actually a surrogate for Sen. Bernie Sanders’ presidential campaign and even tried to get the support of the Muslim Democratic Club of New York for his bid for the White House.

Sarsour was spotted on screen during the convention on Tuesday after cameras showed a meeting of Muslim delegates. The Muslim Delegates Assembly was approved by the DNC to participate in the event, but the meeting in question was not run by the DNC.