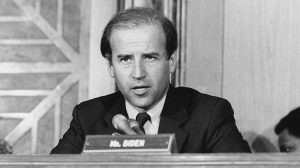 Uh-oh, folks! I found the patriarchy!

Turns out the gender pay gap is real and, according to a report from the Washington Free Beacon, it was policy over at Team Biden throughout his entire 35-year career in the Senate.

Women working for former vice president Joe Biden were paid less than their male counterparts during the entirety of Biden’s 35 years in the U.S. Senate, according to a Washington Free Beacon analysis.

When Biden joined the Senate in 1973, the average pay for a full-time female staffer in his office was $5,029, about 68 percent of the $7,383 average paid to men during that span, according to the secretary of the Senate’s first spending report for the 93rd Congress. A Free Beacon analysis of spending reports covering Biden’s full Senate tenure found that he never achieved gender pay equity. Over the course of Biden’s time in the Senate, women on average earned just 67 cents for each dollar earned by men.

The Free Beacon conducted its analysis using salary disbursements disclosed in the biannual report of the secretary of the Senate. As with previous Free Beacon gender pay gap investigations, only staffers employed for the entirety of any of the six-month pay periods analyzed were included in the calculations.

Here’s that same info, but in a pretty graph from the Secretary of the Senate:

Women working for the former Delaware Senator earned less than half of their male co-workers in 11 of the six-month periods analyzed by the Free Beacon. The absolute closest Biden came to paying his male and female employees comparably was in early 2002 when the ladies of Team Biden earned up to 98 percent what the dudes did.

The pay gap hit its widest points in 1983 and 1984, when the women made as little as 44 percent of what Biden’s male employees made.

The Beacon points out that just months before Biden made Clarence Thomas’s treatment of female workers the focus of Thomas’s Supreme Court nomination hearings, he was paying his female workers 45% what he was paying males. This disparity would last all the way into his final months as Senator, during which time his female staffers only made 66 percent as much as men.

As a presidential contender, Biden has billed himself as one who has “fought for women’s rights his whole career,” pointing to legislation signed during the Obama administration.

Except, as the Free Beacon also notes, the Obama White House had a habit of underpaying its female employees too.

Oh, the irony is just delicious.