Joe Biden: “No One Needs A Magazine With 100 Clips In It” 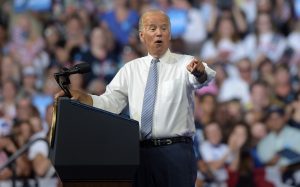 Another weekend, another epically moronic gaffe out of Joe Biden.

At a campaign stop in Concord, New Hampshire, Biden stated that he believes in the Second Amendment, but criticized the ownership of high capacity magazines that hold “100 clips.”

Yup. He said that.

It’s one thing to confuse a magazine with a clip, ignorant liberals do it all the time. But the man confused a clip with a bullet. How?!

Now listen, I can have just as many clips in my magazine as I want. This is America!

In all seriousness, someone needs to print this out and start distributing it at Democrat campaign events. If they can handle the triggering sight of big, pointy bullets, that is: 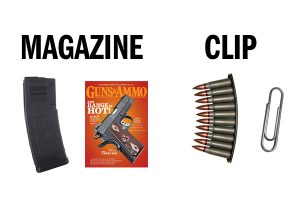 To be completely fair to the guy, he did sputter out a correction pretty quickly as he continued to ramble that we only get a certain number of shells with which to hunt geese but as many bullets as we can carry to go hunting children. Because that’s the hilariously invalid comparison he made. Ugh.

And, of course, the People of Twitter™ had plenty to say about Biden’s oopsie.

Biden is clearly slipping mentally.. I hope when he fails to become President Obama can use his connections at Netflix to bring us a miniseries about Bidens adventure with Cornpop.

Can someone please escort him to the nearest Assisted Living facility. When he blinks hard and tries to remember his thought is a sign of dementia. He is not fit to run for the office. At this point, I feel sorry for the guy. Bow out with some dignity intact!