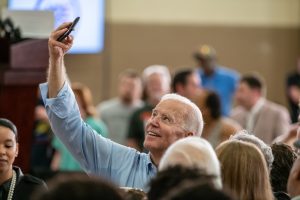 Democrat presidential candidate Joe Biden was quick to attack President Donald Trump on Tuesday after Trump referred to impeachment as a “lynching,” which is the same term that Biden used in 1998 to describe the impeachment of then-President Bill Clinton.

“So some day, if a Democrat becomes President and the Republicans win the House, even by a tiny margin, they can impeach the President, without due process or fairness or any legal rights,” Trump tweeted. “All Republicans must remember what they are witnessing here – a lynching. But we will WIN!”

Biden responded: “Impeachment is not ‘lynching,’ it is part of our Constitution. Our country has a dark, shameful history with lynching, and to even think about making this comparison is abhorrent. It’s despicable.”

Impeachment is not "lynching," it is part of our Constitution. Our country has a dark, shameful history with lynching, and to even think about making this comparison is abhorrent. It's despicable. https://t.co/QcC25vhNeb

Now, it’s already insane enough that Biden is attempting to be Trump’s PC police and banning him from using “lynching” in a non-literal fashion. Because no one has ever heard of a proverbial “lynch mob” or ever considered the word appropriate to use figuratively in our modern, enlightened society. Gotcha.

Trump’s use of the L-word sparked such fervor that Merriam-Webster’s dictionary site responded to the 17,400% uptick in searches for the word with a quick primer on the word’s history:

Lynch and lynching may occasionally be found used in a figurative or hyperbolic manner (describing a situation in which no one is actually put to death). It has also been used in reference to a president who is, or has been, close to impeachment.

Except there’s one notable use of the word they seem to have forgotten: Joe Biden’s reference to the Clinton impeachment proceedings in 1998.

In a CNN appearance in October of 1998, Biden referred to the Clinton impeachment as a “partisan lynching.”

Even if the President should be impeached, history is going to question whether or not this was just a partisan lynching or whether or not it was something that in fact met the standard, the very high bar, that was set by the founders as to what constituted an impeachable offense.

Say what you will about Trump, but he certainly didn’t mention a “rope and a tree.” Eesh.

GOP Rapid Response Director Steve Guest highlighted one of the lynching comments from Nadler, who in 2008, said: “I am the president’s defender in the sense that I haven’t seen anything yet that would rise, in my opinion, to the level of impeachable offense. … I wish we could get this over with quickly. … In pushing the process, in pushing the arguments of fairness and due process the Republicans so far have been running a lynch mob.”

In 1998, Meeks said, “What we are doing here is not a prosecution, it is a persecution and indeed it is a political lynching.”

In 1998, Rangel referred to the GOP pro-impeachment bloc as a “lynch mob mentality, that says this man has to go.”

SUPERCUT: Democrats are super consistent on the topic of using the word “lynching” in reference to an impeachment pic.twitter.com/qT0QHAUwpf

I was going to suggest this as yet another piece of evidence that Joe Biden’s brain might be a little too close to swiss cheese for him to make a decent president (among other issues), but it appears to be a case of hilariously poetic partisan amnesia.