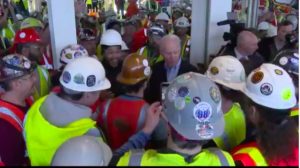 You know, the more Joe Biden opens his mouth, the more convinced we should probably all be that this guy is senile and probably not fit to operate a mechanical pencil, let alone the entire country.

He can’t remember what the Declaration of Independence is called, nor can he quote bits of it that any child over the age of five could probably recite.

Biden recently gave a mini-speech in which he stumbled all over his words and ended up saying we need to reelect President Trump. I concur with that statement, but the fact he said it while running for president is the mother of all gaffes.

And now for Exhibit C.

Apparently, new video has surfaced of Joe Biden getting into a heated altercation with a pro-gun auto worker over gun rights in which he tells the individual he’s “full of sh**” and ended with a threat to slap the man, along with vowing to take away his “AR-14.”

Yeah. Not a good look, Joe.

The incident, captured on video, shows Biden getting extremely agitated during a casual question-and-answer session with line workers at a Michigan auto factory — members of a demographic Biden desperately needs to win over in order to make a play for the all-important battleground state.

The audio is shaky, but some of Biden’s words come through loud and clear.

WATCH: "You’re full of sh*t," @JoeBiden tells a man who accused him of "actively trying to end our Second Amendment right."

The worker accuses Biden of “actively trying to end our Second Amendment rights,” apparently referring to Biden’s decision to appoint former Congressman and failed presidential candidate Beto O’Rourke, who campaigned on gun confiscation, as his campaign’s lead on gun policy.

“You’re full of sh**!” Biden responds, getting in the man’s face.

“I support the 2nd Amendment,” he added, getting angry. “The 2nd Amendment, just like right now if you yell fire, that’s not free speech. I have a shotgun…my sons hunt. I’m not taking your guns away at all.”

If you thought Biden was done there, think again. Crazy Uncle Joe decided to continue his tirade after hearing the man he argued with call him a “horse’s a**,” going on to tell him he didn’t need an AR-14 — it’s actually AR-15, but we all know Biden’s brain is not firing on all cylinders — and threatening to slap him.

The former vice president continued to rage and rail while being pulled away by his aides.

This man is a complete and total disaster. His nabbing the nomination almost certainly means victory for Trump. Surely there aren’t people who actually want this man to be the leader of the free world, right?