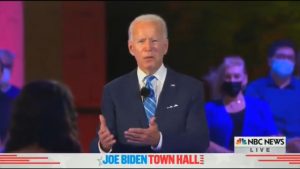 Former Vice President Joe Biden has finally given an answer to the question he has dodged repeatedly about court packing, stating that he’s “not a fan” of it. Biden had been asked this question repeatedly over the course of the last few weeks and refused to answer it, even going so far as to say voters “didn’t deserve to know” where he stood on the issue.

“Look what I want them to focus on, as I’ve respectfully suggested, court packing is going on now,” Biden told Local 12’s Kyle Inskeep on Monday evening.

“Never before when an election has already begun and millions of votes already cast, has it — that a supreme court nominee was put forward, had never happened before,” he added in reference to the confirmation process for Judge Amy Coney Barrett. “One of the reasons is the Constitution implies that the only shot the American people get to determine who will be on a lifetime appointment to the Supreme Court or federal courts is when they pick their senator and their president because the president names and the Senate advises and consents.”

Biden, reiterating that he didn’t “want to get off on that whole issue,” stated that he is “not a fan of court packing” and accused Trump of trying to make the election “about whether or not [he] would pack the court or not pack the court.”

“The focus is why is he doing what he’s doing now?” Biden said. “Why now, with less than 24 days to go until the election?”

The idea of court packing is dangerous. Not only does it mean that liberal judges would then control the constitutionality of all the laws that get created in Congress, thus enabling the left to put many of their socialistic policies into law, it also means that when conservatives get an opportunity they can swing things the other way.

Balance would be a real problem. Things could get out of control. The system is fine the way it is. Let’s hope Trump wins and keeps things the way they are.