Joe Biden: Coal Miners Can “Learn How To Program, For God’s Sake!” 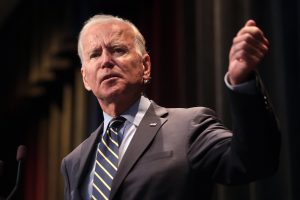 Not to be outdone by fellow presidential hopeful Elizabeth Warren, who famously said that the millions of people unemployed under her healthcare policies could just sell auto insurance, Joe Biden had a genius plan for that pesky segment of the workforce that keeps America running on non-renewable energy: coal miners.

Biden recently claimed that blue-collar job losses shouldn’t deter America from investing in a “greener” workforce and that retraining our environmentally unfriendly workforce is as easy as applie pie.

According to a live tweet thread by the Washington Post’s Dave Wiegel, Biden made a particularly callous comment regarding his plans for “jobs of the future” if elected in 2020, declaring that coal miners should simply learn to code.

“Anybody who can go down 3,000 feet in a mine can sure as hell learn to program as well,” Biden told his Derry, New Hampshire audience, according to Newsweek. “Anybody who can throw coal into a furnace can learn how to program, for God’s sake!”

But Biden returns to the same point: "Anybody who can throw coal into a furnace can learn how to program, for God's sake!"

As the wife of a skilled tradesman who can barely figure out how to operate his own Facebook account, I would like to personally testify that this line of reasoning is absolute garbage.

But, predictably, Biden’s campaigning in New Hampshire this weekend yielded lots more garbage opinions like that one.

Reaching peak senility at a campaign event on Sunday, Biden spoke about plans to totally eliminate fossil fuels especially coal. The dude literally declared his intentions to put fossil fuel executives in “in jail,” if they didn’t comply with his demands, then said we’ll all be dead if we don’t stop using fossil fuels.

Looks like 2020 is going to be an exciting year for Democrats! I need a Tylenol.