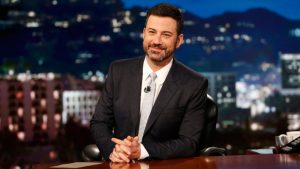 Jimmy Kimmel doesn’t seem to have much of a career apart from his brutal and humor-devoid low blows at anyone he disagrees with.

A classic case of the ignorant, insulated limousine liberal, he regularly falls back on the tired stereotype of anyone who disagrees with his progressive politics as an ignorant, trashy hillbilly.

So when he caught wind of the fact that wounded veteran Brian Kolfage had started a GoFundMe to pay for Trump’s elusive border wall ahead of the partial government shutdown, he aimed very, very low.

It would be an understatement to say the campaign, which raised nearly $15 million in just five days has gone viral. Not everyone is a fan, considering many taxpayers would prefer the money they’re already shelling out to the federal government be used to secure our borders, but there is no doubt that those who have donated simply care that much about the security of our nation.

Trump is leaving Washington, D.C. an absolute mess. He caused quite a thing today. He announced today he’s not going to sign a resolution to fund the government. This is a deal that was crafted by Republicans. They thought he was going to sign it. He surprised them and said, I’m not signing it unless I get the $5 billion I want for my border wall. If he doesn’t get that money, which he won’t, tomorrow night at midnight the government will shut down, which means hundreds of thousands of workers won’t get paid.

Basically, Trump is taking paychecks from federal employees at Christmas time to punish Congress for not paying for a wall he swore 500 times Mexico would be paying for. So Feliz Navidad, everyone. But here’s the twist. The twist is the President might not need Mexico or Congress to pay for the wall at all because there are some very dopey people ready to pay for it themselves.

It’s a valid point that Trump consistently promised Mexico would pay for the wall. It is a completely invalid point that you’d have to be dopey to donate to this campaign. The amount of money the GoFundMe has raised is indicative of just how badly we need to harden our border.

Not according to Kimmel, however. The left’s criticism of the wall is relatively weak, and seems to range between “it’s unnecessary” and “it’s never going to happen,” which seem like pretty contradictory reasons to oppose it, but whatever. Any way to criticize Trump, right?

Of course, when criticizing a sitting president takes a very ugly turn, it’s when you start talking down your elitist nose at his supporters.

People, this is what people do with their disposable income when they don’t have loans from college to pay off. Donating money for a wall that will never exist. It’s like starting a college fund for Harry Potter. It’s a, it’s a waste. A more useful thing to do with your money would be to go outside and feed it to a bird but you do have to admire the sacrifice they’re making. I mean, a lot of these people are dipping into their meth money for this …

Progressives always claim to be champions of the people, but they have a very hard time hiding their contempt for the “lower classes.” Also, how funny is it that they b*tch and moan about student loan debt yet clearly still consider people who go to college and accumulate crippling debt in exchange for useless degrees intellectually superior to people who maintain healthy credit scores and can actually afford to buy a house when they start a family?

One final thought as well—building a wall would be very bad for international drug smugglers. So, Jimmy, if you think that people who smoke meth are actually cognizant enough to care what goes on in Washington and at the border, doesn’t it make more sense that they’d rather have less security down there so their drug mules can have an easy ride?

The people who donated to Kolfage’s GoFundMe page clearly care about law, order, and security. No one is going to part with that much money simply for the sake of satisfying their drug-addled racist tendencies.

Here’s what Kolfage himself said about why he started the campaign:

As a veteran who has given so much, 3 limbs, I feel deeply invested to this nation to ensure future generations have everything we have today. Too many Americans have been murdered by illegal aliens and too many illegals are taking advantage of the United States taxpayers with no means of ever contributing to our society. I have grandparents who immigrated to America legally, they did it the correct way and it’s time we uphold our laws, and get this wall BUILT! It’s up to Americans to help out and pitch in to get this project rolling. If the 63 million people who voted for Trump each pledge $80, we can build the wall. That equates to roughly five billion dollars, even if we get half, that’s half the wall. We can do this.