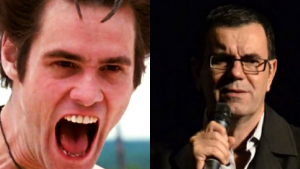 You know when you’re a little kid, and you think being a grownup will be so cool, because you can stay up as late as you want and you’ll have your own bank account and eat cookies for breakfast?

Then, you grow up, and realize that if you stay up late you’re exhausted at work the next day and bank accounts only have money in them if you actually manage to make it to work day in and day out and if you eat cookies for breakfast you’ll get a headache?

When you’re young, starry-eyed, and idealistic, mandating free everything seems like a great idea.

Until you’ve seen what happens when it’s actually implemented and realize that mandating free everything comes at a cost.

And who better to remind us exactly what the natural result of socialism looks like then oh I don’t know, someone actually living in a socialist country?

Jim Carrey, a man most famous for talking out of his rear in a movie about a pet detective, declared earlier this week on Real Time With Bill Maher that Americans should “say yes to socialism.”

One Venezuelan columnist seems to think he was, once again, talking out of his rear.

According to Fox News, columnist Laureano Márquez wrote an open letter to the Hollywood armchair revolutionary, explaining why we should definitely say “no” to socialism:

“Dear Jim, I admire you a lot, but sometimes it seems that the inability of Hollywood stars to understand politics is directly proportional to their talent,” Marquez began his column.

“I read that…you said: ‘We have to say yes to socialism, to the word [‘socialism’] and to everything.’ Perhaps for you, as for all humanity, the word ‘socialism’ sounds beautiful,” he continued.

The journalist then went on to explain that while many define socialism as “the antithesis of selfishness, synonym of concern for others…support for the weakest and their needs, of seeking health and education for all,” in reality Marquez believes socialism today has “deep threats.”

“[In] Venezuela, what we find is just that our regime is not – for God’s sake – the antithesis of selfishness,” he wrote Wednesday. “In Venezuela, dear Jim, from what I have just told you, there is no equitable distribution of wealth; wealth is concentrated, as rarely before in our history, in very few hands.”

Marquez explained that people in Venezuela are “at God’s mercy” and are fleeing the country “however way they can” as they do not have access to medication, food or other basic needs.

“[This is] a tragedy that is compounded by the denial of a regime that claims that the population has never been better.”

Fox also adds that, since 2015, 1.6 million Venezuelans have said “no” to socialism and fled their nation in crisis.

Those who remain are subject to endless bread lines, unreliable power, gas, and water supplies, and have resorted to rummaging through garbage, killing dogs in the street, and even eating zoo animals just to survive.

Do not say “yes” to socialism.