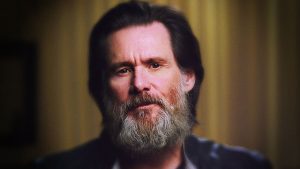 Actor Jim Carrey has become some sort of insane prophet of the left who looks and acts like a maniac who has spent years living in the wilderness eating bugs and talking to himself.

Over the course of the last year or so Carrey has made his opinion about President Trump and his administration very clear, posting weird artwork designed to slam these individuals and to make some sort of odd point on issues he’s passionate about.

Well, it appears that after releasing a new film, one that was so terrible it went straight to video and earned a zero percent on Rotten Tomatoes, he’s going back to being an oddball, having penned a new Pledge of Allegiance designed to take aim at school shootings.

It’s even more horrible than you imagine.

The painting depicts a bullet-ridden classroom with a new version of the “Pledge of Allegiance” written on the wall.

“I pledge allegiance to the flag, of the United States of America. And to the gun makers for whom it stands, one nation, under greed-indefensible,” reads the new pledge. “With butchery and injustice to the most innocent of all.”

And by referring to the “butchery and injustice” against “the most innocent of all,” Carrey did not mean the millions of unborn babies killed by Planned Parenthood, an organization he has yet to portray in one of his paintings.

Just to give you a preview of the other wackiness contained in Carrey’s artwork, have a look at this:

Mr. Carrey doesn’t seem to understand that guns and the Second Amendment are not the root cause of all these shootings. If that were the main problem, why have we had gun rights for 200 plus years and only recently have had this phenomenon occur with such regularity?

The reason kids are shooting each other has to do with the fact we’ve removed God and His objective standards of right and wrong from every facet of society and have destroyed the traditional family unit, removing the structure kids need to grow up healthy and well-adjusted.

Children need a mom and a dad. Not two of each of. They need a mom and dad dedicated to one relationship for life. Schools need to reinforce these values and norms, as do churches.