Jim Carrey Just Posted His Most Despicable, Disgusting Artwork Yet 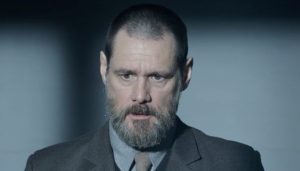 Actor Jim Carrey seems to be the identity of the one who flew over the cuckoo’s nest, as he’s dropped his funny man shenanigans and opted to become a disrespectful, grating, irritatingly outspoken liberal activist via artwork he keeps creating.

The first pieces he did that earned him some news coverage was of Press Secretary Sarah Sanders, a picture that didn’t quite go over well with many folks because he more or less mocked her looks.

It’s pretty much been a downhill slide ever since, only now it seems Carrey decided to stop the slide and just jump in the hole.

His recent creation features someone urinating on Trump’s grave, proving that “artists” like Jim lack any sense of moral decency.

In the caption, Carrey said: “Oh how I urine for this all to be over!”

The inscription on the cartoon grave reads: “HERE LIES NO.45. WENT TO HELL AND TOOK THE GOP WITH HIM.”

Oh how I urine for this all to be over! pic.twitter.com/uzLULtNPLE

Carrey stands by his work and seems to have no plans of stopping anytime soon. In an interview with “The Young Turks,” he even called his work gratifying.

“I am so gratified by the reaction to my little drawings,” Carrey said. “It is the job of a political cartoon to vex those who abuse power or enable those abuses.”

You know, it’s likely Carrey has always had these political views, but unfortunately, thanks to social media, he now has a platform from which to share those thoughts and views to a mass audience.

Remember the days when you could watch movies and television with these actors and actresses and never have a clue what they thought about political matters unless asked in some sort of interview, which you then had to watch or read to know about?

Most of the time TV interviewers stuck to the topic of whatever movie said actor had coming out rather than jumping into heavy discussion.

Hey, if these folks want to be political, go right ahead. Just wish we didn’t all have to know about every detail.