Jill Stein is Still Re-Counting Votes From the 2016 Election 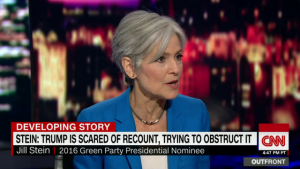 Sometimes, the news cycle gets so chaotic and dramatic that you just need to take a break and think about more lighthearted things.

Your summer plans, catching up with old friends, a favorite hobby, a nice meal. Or, perhaps, the progress reports from Jill Stein’s 2016 election re-count.

Yes. This is a real thing. And yes. She’s still at it.

And it’s going just about as you would expect, according to Frontpage Mag.

“Before the Mueller coup won the soft hearts of progs from Marin County to Martha’s Vineyard, before Hillary’s Soup Grapes Across America tour, there was Jill Stein’s recount,” they write.

“D.r Jill Stein, DDS, PDHD, DOS, SNAFU, announced that there would be a recount of the election. The more money gullible idiots sent her, the more recounting there would be. Until the recount finally proved that Trump didn’t win. Jill Stein did.”

Sadly, the donations her small but loyal group of supporters sent in have been quite supportive…of many things other than the actual recount, according to The Daily Beast:

Ongoing litigation, travel costs, and staff salaries are also likely to eat up whatever is left, meaning those who donated to Stein are unlikely to receive a once-promised chance to vote on how the post-recount money would be spent. Nor have donors been given much of a window into how Stein is actually spending their donations.

The last FEC filing from the Stein campaign was for the month of September 2017. And the last update from the campaign itself came in a post on April 20, in which it said it was down to $932,178 in recount funds.

In a May 7, 2018 letter, the FEC warned Stein campaign treasurer Steven Welzer that he was violating federal law by not accounting for half a year of spending.

“The failure to timely file this report may result in civil money penalties, suspension of matching funds, an audit or legal enforcement action,” the letter states, noting there is no grace period.

Funny, considering it appears the “recount staff” is taking home quite generous compensation for their efforts:

Staff who appear to be working on the recount are the some of same who worked on Stein’s presidential campaign. Schwab, director of communications, made $3,840 in September 2017, according to the last available FEC filing. Campaign Manager David Cobb was also on the payroll as of September 2017, taking home a monthly salary of $7,520. Cobb announced the recount effort in a Facebook Live video and, in a subsequent video, identified himself as “Jill Stein’s campaign manager for the recount.” Cobb told The Daily Beast he is “still with the campaign,” but did not elaborate.

There is still a persistent narrative on the left that Trump actually committed voter fraud, which one could see in full swing on POTUS’ Twitter account this morning when he announced he’d be pardoning conservative author, filmmaker, and convicted campaign finance felon, Dinesh D’Souza, on Thursday.

Twitter users drew a comparison between D’Souza, who was convicted in 2014 for straw donations he made to the senatorial campaign of a college friend, and Trump’s “voter fraud”, for which no one has made any credible allegations of the Trump campaign doing literally ever.

But you know…anything for the #Resistance, right?