Jill Biden Reacts To Criticism Over Her Education Doctorate: ‘Such A Surprise’ 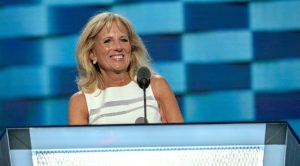 Jill Biden recently sat down for an interview with that shining light of legitimate journalism we know as “Late Show” host Stephen Colbert, noting that she was surprised by the criticism she received from folks over referring to herself as a doctor, even though she has no medical degree.

Well, maybe that has a little something to do with the fact that you are, in fact, not a medical doctor, Mrs. Biden. Which is kind of what most people think of when they hear the phrase “doctor” in front of a person’s name.

“You once said in your own memoir, ‘The role I always felt most at home in is Dr. Biden,’” Colbert began. “Now some people have recently taken upon themselves to question that title of yours. Do you have any reaction to those people?”

Colbert was apparently referencing a Saturday op-ed by Joseph Epstein in The Wall Street Journal titled “Is There a Doctor in the White House? Not if You Need an M.D.” Epstein, a former lecturer at Northwestern University who served as editor of The American Scholar from 1975 to 1997, argued that Jill Biden, who obtained a doctorate in education from the University of Delaware in 2007, should drop the title.

“Yeah, that was such a surprise,” Jill Biden answered Colbert, adding, “It was really the tone of it that I think that — you know, he called me ‘kiddo.’ One of the things I’m most proud of is my doctorate; I mean, I worked so hard for it. And, you know, Joe came when I defended my thesis.”

“I got to hand her her doctorate on the stage at the University of Delaware,” Joe Biden said. “She had two masters’ degrees, she kept going to school all the time while teaching at night, and then what happens is, I said, ‘Jill, why don’t a doctorate and make us some real money.’ She gets a doctorate and gets a $2,000 raise.”

“But look at all the people who came out in support of me,” Mrs. Biden added. “I am so grateful. And I was just overwhelmed by how gracious people were toward me.”

Colbert then took it upon himself to fawn over Mrs. Biden by saying that the reason folks are attacking her over her doctorate is because they can’t find anything else.

Well, here’s the thing. I don’t think the vast majority of conservatives are all that concerned about Mrs. Biden. It’s her husband who is corrupt to the core, along with her baby boy, Hunter.

And seeing as how he might be running the country, that should be the focus of our inquiries.

TONIGHT! @StephenAtHome sits down with President-elect @JoeBiden and @DrBiden and they respond to the attacks on her doctorate degree. #LSSC pic.twitter.com/HMDGxoaq27