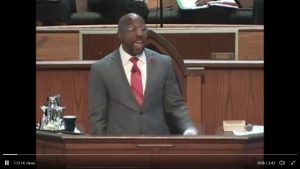 In the Palm Sunday sermon, Warnock attacked Netanyahu, calling him “racist and vicious,” while citing the oft-stated myth that the Palestinian birth rate would dwarf the Jews’ birth rate in Israel and thus render the Jewish state obsolete. (For an explanation of the comparative birth rates, see here, here, and here.)

Who is this young man? He is young Israeli children and young Palestinian children. In a land of violence and bloodshed and occupation, caught in the crossfire, casualties of the games that powerful people play.

Some of you acting like you didn’t understand the magnitude of what he just said. That’s tantamount to saying “occupation today, occupation tomorrow, occupation forever.” Why? Because when you look at the demographic trends, the Arabs will outnumber the Jews. And so if you don’t have a Palestinian state, you cannot have a Jewish democracy. The state will either be Jewish or it will be a democracy. It cannot be both if you do not have a Palestinian state, you will have to have apartheid in Israel that denies other citizens, sisters and brothers citizenship. Or you will have a democracy that is not a Jewish state.

During his 2015 Palm Sunday Sermon, Dem. Raphael Warnock explicitly called Israel an “Apartheid” State, describing it as “a land of violence and bloodshed and occupation” and he referred to Israeli leaders as “clever politicians,” and accusing them of being “racist and vicious.” pic.twitter.com/jfdkOUzung

Matt Brooks, Republican Jewish Coalition Director, replied, “Rev. Warnock recently told a Jewish group that he supports Israel, but he has a long history of statements that testify to the fact that he does not. His 2016 comparison of Prime Minister Netanyahu to segregationist George Wallace in front of an African American audience was simple hatemongering.”

“Warnock claims to have recently come to understand that Hamas is a violent enemy threatening Israel. There is a great deal more that he needs to learn about the Palestinians’ goal of genocide and Israel’s history of sacrificing for peace, before the Jewish community could ever begin to trust his newly announced “support” of Israel. The preponderance of anti-Israel statements in his past argues that he will side with Israel’s opponents in the Democratic Party and against Israel at every opportunity. In fact, Linda Sarsour, a close friend of the antisemitic ‘Squad’ in Congress, endorsed Warnock’s comments about Netanyahu, just as ‘Squad’ members Reps. Rashida Tlaib and Ilhan Omar have supported his campaign,” Brooks said.

“Warnock is the wrong choice for Georgia and for the US Senate. Republican Senator Kelly Loeffler is a good friend of Israel and the Jewish community, and we hope the voters of Georgia will re-elect her to the Senate on January 5,” he concluded.

The statement made by Warnock is absolutely anti-Semitic, which has become a popular point of view to take in the current Democratic Party. This is unacceptable.

We deserve leaders who see the value in others, regardless of race, religion, and other things. Warnock is far too hateful to occupy a place in our government.