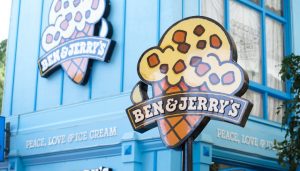 Not long after Ben & Jerry’s decided to end sales in specific parts of the nation of Israel, a Jewish franchise owner said this particular move inspired low store traffic and vowed that he would donate a portion of his store’s profits to charities based in Israel.

It was recently reported that the popular ice cream manufacturer, which has earned a reputation for supporting far left policies, stated on July 19 they would be ending sales in areas that they claimed were “occupied” by Israelis.

“We believe it is inconsistent with our values for Ben & Jerry’s ice cream to be sold in the Occupied Palestinian Territory (OPT). We also hear and recognize the concerns shared with us by our fans and trusted partners… Although Ben & Jerry’s will no longer be sold in the OPT, we will stay in Israel through a different arrangement. We will share an update on this as soon as we’re ready,” the company said.

A lot of franchise owners, including Joel Gasman who is located in New York City, let it be known they did not approve of the company’s boycott.

Gasman, who runs the store on West 104th Street and Broadway, said he can’t stomach the boycott imposed last week in Israeli-occupied areas — claiming it’s caused his business in the Big Apple to tank.

But despite the dwindling sales, Gasman plans on serving up some just desserts — in the form of a 10-percent donation of his profits to fund educational causes in Israel in protest of the Vermont-based ice cream maker’s politics.

Gasman, himself Jewish and who has a large Jewish customer base, told the NY Post that “we couldn’t sit back and watch without speaking up.”

“We’ve lost some foot traffic as well as bigger catering jobs that usually help us during the summer,” he went on to say. “We’re getting bad reviews online that have nothing to do with the store, only in regards to corporate’s views… We felt like many people didn’t understand the nature of a franchise business and how small business owners are affected by their parent corporation’s views.”

Thirty-five states have enacted legislation against the Boycott, Divestment, and Sanctions (BDS) campaign against Israel — a movement that many believe is rooted in anti-Semitism. Israeli foreign minister Yair Lapid demanded that states enforce such laws against Ben & Jerry’s, declaring that the firm “will not treat the State of Israel like this without a response.”

“As you know, Florida has long had a strong relationship with the State of Israel,” DeSantis said in a statement he addressed to Ben & Jerry’s board. “As a matter of law and principle, the State of Florida does not tolerate discrimination against the State of Israel or the Israeli people, including boycotts and divestments targeting Israel.”

The left has grown ever more hostile and anti-Semitic over the last decade or so, which is ironic given how much they brag about being “woke” and ahead of the curve when it comes to fighting “racism,” yet they seem to be totally oblivious to the fact they engage in it themselves with their opinions on Jews and Israel.