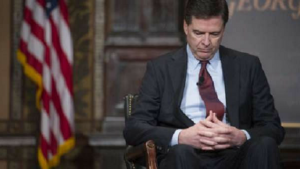 If James Comey had any shame, he’d stay quiet and keep his head down following the very damning IG report that detailed him as a “subordinate” FBI director with trouble respecting authority.

Apparently, he does not, and he’s telling the world to vote Democrat.

Taking to Twitter this week with the same self-righteous air we were treated to following the release of his book “A Higher Loyalty”, clearly under the impression he has some moral standing from which to lecture Americans on the direction our country was headed.

This Republican Congress has proven incapable of fulfilling the Founders’ design that “Ambition must … counteract ambition.” All who believe in this country’s values must vote for Democrats this fall. Policy differences don’t matter right now. History has its eyes on us.

Is he unaware he basically handed the 2006 election to Trump, that all his highly unethical behavior at the FBI during his tenure of director has only recently come to light, and that he pretty much has no friends on the left or the right?

The Daily Wire explains how bitter Hillary and many Democrats still are to Comey’s perceived betrayal:

Clinton’s 2016 campaign apparatus has long been furious at Comey for sending a letter to Congress on October 28, 2016, in which he wrote that the FBI had “learned of the existence of emails that appear to be pertinent to the investigation” into her private email server.

Hillary Clinton has said, “I was on the way to winning until the combination of Jim Comey’s letter on October 28 and Russian Wikileaks raised doubts in the minds of people who were inclined to vote for me but got scared off.”

As it turns out, it’s likely that Comey wrote the letter because he was afraid Clinton would win the election, and didn’t want her Presidency to seem illegitimate if it later came out that she was still under investigation by the FBI.

But Clinton is right–while there are certainly many good reasons that Trump won the election, there’s a good chance Comey’s letter may have tipped the scales solidly in his favor.

So maybe, if Comey wants Democrats to win big in November, he might want to hang up his campaign meddling hat and stick to gossiping about Trump’s tan lines.