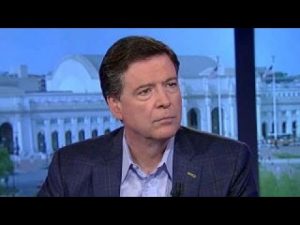 Disgraced former FBI Director James Comey is once again desperate to be back in the spotlight, which is why he’s probably penned yet another book trashing President Trump. However, this book won’t actually be released until Jan. 12, 2021.

The book, Saving Justice: Truth, Transparency, and Trust is due out a week before Inauguration Day, which suggests that perhaps, folks like Comey aren’t too confident in Biden’s chances of taking down the president. If they were, surely this book would be released earlier than January, right?

Anyway, here’s what the Amazon description says the book is about:

“Comey shows just how essential it is to pursue the primacy of truth for federal law enforcement,” the description continues on. “ Saving Justice is gracefully written and honestly told, a clarion call for a return to fairness and equity in the law.”

Here’s a little more information from The Washington Examiner:

Comey has come under renewed scrutiny in recent weeks as the credibility of British ex-spy Christopher Steele’s anti-Trump dossier, which the FBI relied heavily on to justify surveilling Trump campaign associate Carter Page, has increasingly been criticized.

The FBI director’s new book will be a follow-up to his No. 1 New York Times bestselling memoir, A Higher Loyalty, published in April 2018, in which he discussed his career in government, including his controversial handling of both the FBI’s “Midyear Exam” investigation into former Secretary of State Hillary Clinton’s private email server and the bureau’s “Crossfire Hurricane” investigation into Russian election interference and allegations of Trump-Russia collusion, along with details of his brief stint as bureau chief under Trump before he was fired in May 2017.

Why would anyone with half a brain care to read this book after the election is over if Biden wins? That just doesn’t make any sense. Surely the left, who have dedicated almost endless time and resources to taking down Trump, would be ready to close the book on that chapter and move on by then, wouldn’t they?

Or, maybe, the purpose of this book is to provide fodder for the Democratic Party’s 2021 efforts to impeach Trump should he get a second term. Nothing is beyond the realm of possibility with these people.