Jackie Chan’s Estranged Daughter Says She And Her Girlfriend Are Homeless. Know Why? 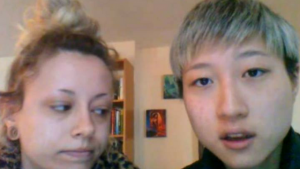 Apparently, neither of these young women have heard of getting a job.

In what could be described as quite possibly the most millennial thing you’ll ever hear, Jackie Chan’s estranged daughter and her girlfriend have taken to the internet to complain that they are now homeless, “due to homophobic parents,” and yes that is literally what they said.

The couple, Etta Ng, 18, and her girlfriend Andi Autumn, posted a video on YouTube late April explaining their situation.

“We’ve been homeless for a month due to homophobic parents. We pretty much slept under a bridge, and other things,” said Ng, who is the daughter of action star Jackie Chan and Elaine Ng, who Chan had an affair with while being married to his current wife.

“We will have to be split up if we go to any kind of government facility,” Autumn chimed in.

“We don’t know what to do at this point,” Ng continued. It is worth noting at this point that they appear to be in a very nicely furnished home. “We just want to let people know what’s going on because at this point it seems ridiculous that no one can help. I don’t understand.”

Well, I’m guessing you do, and fortunately, so does her mother (Chan has never publically spoken about his daughter).

“I feel that if they have no money, they should go find work,” said Ng, speaking to the website Coconuts. “They shouldn’t film a clip telling others they are broke and who Etta’s father is. People all over the world work hard and don’t rely on someone else’s fame to get money.”

She then pointed out something awfully suspicious about the pair making a plea like this: “[Autumn is] already 30-something and is a teacher with working experience. How can she tell an 18-year-old girl to film such a video? It’s wrong. I feel that if they have no money, they should go find work. They shouldn’t film a clip telling others they are broke and who Etta’s father is.”

Not only is there a gaping age difference, Autumn is also a bit of a celebrity herself, with over 100,000 followers on her Instagram page.

These two think they’re being discriminated against because of their sexuality, which they’ve been whining about since they announced their relationship on Instagram last year, according to People magazine.

But what Ng is realizing and Autumn lives in denial of is that not working tends to result in poverty, and you’re not entitled to handouts just because you’re gay or your parents don’t accept your relationship.

Is this really something that has to be explained?