J.J. Watt is Awesome – Now we know how much! 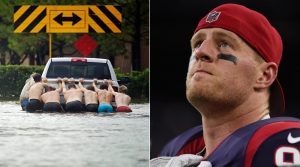 J.J. Watt, defensive end for the Houston Texans is doing his part to help the victims of Hurricane Harvey. After the storm he created Houston Flood Relief Fund on youcaring.com.

Watt’s mother is also doing her part to help the victims of Hurricane Harvey. Back in his hometown of Pewaukee, Wisconsin Connie Watt has been collecting items that people have donated to the victims.

Connie Watt told tmj4.com, “He was trying to figure out how he could get the products in Texas. I said let us fill the trucks up here in Wisconsin for you and then you just meet them down there when they’re ready to arrive.”

The owner of the Tennessee Titans donated $1 million to Watt’s Hurricane relief fund.