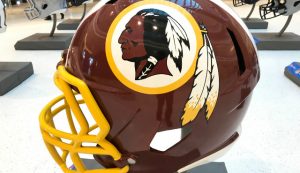 The Washington Redskins have bowed the knee to political correctness and decided to go ahead and change their name, announcing the decision Monday morning. The team has been under pressure by radical left-wing social justice warriors for years now, though owner Dan Snyder promised they would never give in to calls for the name to change.

Unfortunately, money talks, and when advertisers like FedEx joined the crusade to end the team’s name, that applied the right amount of pressure on the right spot for the left to get what they wanted.

Oh, and rest assured, this isn’t going to stop with the Redskins. Now the SJWs will move on to the Kansas City Chiefs, the Atlanta Braves, and the Cleveland Indians. Guaranteed.

The team, which has gone by the old name since the 1930s, announced on Monday that it will no longer use the term “Redskins” after critics have claimed it was racist and insensitive to Native Americans. In a statement team owner Dan Snyder and head coach Ron Rivera said they are “working closely to develop a new name and design,” which have not yet been revealed. The Washington Post reported that the team is unable to reveal the new name because there is an ongoing trademark dispute.

Synder, who purchased the team in 1999, has repeatedly refused to change the team name and defended it in previous years, but calls for the team to change its name were renewed following the death of George Floyd in Minneapolis police custody. Protests, which were mostly peaceful, have spread across the country, demanding an end to systemic racism and police brutality. Some cities are still having demonstrations six weeks after his death.

The majority owner announced on July 3 that the team would be undergoing a “thorough review” of its name. The decision came after a number of organizations that partner with the team called on it to change the name. Amazon, Walmart, Target, and Nike have also taken Redskins merchandise off their sites amid the push.

People who took offense to the name are products of public school indoctrination, having their brains bleached in progressive thought that seeks to turn everyone into a victim and find ways to keep people in a state of perpetual outrage.

So sad to see this cave-in.