It’s Official: Crazy or Not, Kanye’s Tweets Are Helping the Republican Party 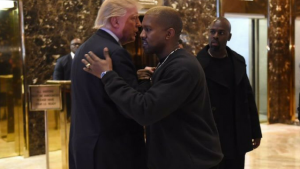 No one has really been sure what he’s been up to over the last week, as he broke Twitter praising his “dragon energy” buddy Donald Trump, posted a picture of himself in a MAGA hat, was snubbed by his “hero” Parkland survivor and teenage anti-gun activist Emma Gonzalez, gave a chaotic interview with TMZ about his drug use, and was told to sit down and shut up by “Auntie Maxine” and fellow crazy person Rep. Maxine Waters.

The left has been viciously attacking the eccentric pop star, but it’s not all due to contempt: they’re also afraid–because they know what the impact of Kanye’s support for Trump might have. And they’re right to be afraid, as now, the data is showing that Kanye’s flirtation with conservatism might just be as influential as they obviously fear it will.

“If you’ve been wondering why West has been so viciously attacked by all of his leftwing colleagues and lectured by black politicians like Mad Maxine Waters – who condescendingly scolded the artist for “speaking out of turn” and needing help in properly forming his thoughts – wonder no more,”  writes David Blackmon of DB Daily Update.

Reuters is reporting that two polls taken one week apart–before and after Kanye’s groundbreaking Twitter tirade–shows a sudden spike in Trump’s approval ratings among black men.

“Trump experienced a similar jump in approval among black people overall, spiking from 8.9 percent on April 22 to 16.5 percent on April 29th, she adds. “Black males were also far more likely to say that they had “mixed feelings” about the president. On the 22nd, 1.5 percent said they had mixed feelings, while 7.1 percent said the same on the 29th.”

The poll is making waves as conservatives and liberals alike consider the very real possibility that Kanye just might have set some voters free from the Democratic Plantation.

A lot of Kanye’s rantings might be incoherent, but that doesn’t mean he isn’t saying things that aren’t true. The Democrats have long held an iron grip on black voters, in spite of the fact that Democratic policies continue to keep the black community impoverished, disarmed, and reliant on the state.

The tide might be turning for the Democratic party and if there are two brain cells left anywhere in the DNC, they might want to stop taking black voters for granted, fast.