It’s Coming Down Right on Our Heads 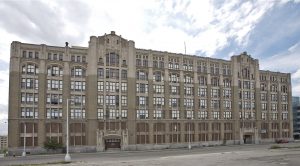 Our apartment building is undergoing some significant changes. It’s the USA Building on N. America Street. You’ve probably seen it; it’s been right there in the same spot for more than two hundred forty years. A lot of people call it home, and we’ve seen some major renovations over the years – twenty-seven, to be exact – to accommodate different needs. Something’s happening now, though, that’s got me kind of worried.

Some of our residents decided they don’t like the way everything is laid out, so about ten years or so ago they started raising hell, trying to get a construction crew in. When everybody didn’t agree and just give them carte blanche to change whatever they wanted, those fools broke out the sledge hammers and started tearing out the walls and ripping up the floors. Now, everything’s a mess, and it looks like these loud mouths are going to keep swinging their hammers until they get their way.

I mentioned earlier that the building has already been altered over the years. The biggest project happened back in 1791, not long after the it was completed. The architects saw the structure needed to be sturdier than they originally designed it to be, so they drew out plans to make it stronger. Then, framers added ten pillars which didn’t really change the building’s look but provided a lot of the support that has kept the walls sturdy for two-and-a-half centuries.

The next renovation came just a few years later, in 1795, and it was followed by the twelfth big change in 1804. Things calmed down a bit after that, and the building stayed pretty much the same until 1865, when another big renovation was needed.

It was all kind of unsettled for a while once the War of Northern Aggression ended, and we saw a couple more renos pretty quickly. In 1868 and again in 1870, architects and engineers were brought in to make structural improvements. A lot of residents grumbled and fussed about it, but the end result was a stronger place to call home. And, after that, things calmed down again for almost fifty years.

1913 proved to be a big year for changes and additions, and I have to say that most of our residents are still griping about the first one. Not only did the HOA decide all residents would have to start paying rent, they added a whole wing to house the folks who would be collecting it! They made another big change right after that one, but it was mostly to the area housing the HOA, so regular residents didn’t really pay attention or even care, since we’re not allowed over there all that much.

The next time a construction crew came in, however, EVERYBODY paid attention, I’m here to tell you. A particular group of residents didn’t like all the partying happening in the building, and they got kind of pissy about all the noise. Instead of taking the time to bring in architects and engineers like they did on all the other big projects, the HOA decided to just hurry up and let these folks have their way so they’d shut up.

A new wing was added to house the men tasked with making sure no resident ever drank alcohol. They ran rampant, busting up parties and trying to keep everyone sober for thirteen years. Then, after another big change was made to the executive manager’s suite, the architects and engineers looked at the prohibition wing professionally instead of emotionally and realized it wasn’t going to stand much longer. It wasn’t long before the wrecking ball showed up and did away with that section altogether.

The building has been modified six times since 1933 – in 1951, ’61, ’64, 67, ’71, and ’92. A couple of other changes were studied over the years, but residents decided against those after the architects’ reports recommended against them. I think that’s what is so disturbing about the mess we’re seeing right now.

Some of the alterations our more vocal residents want to make involve changing the structure of the building, but they’re adamant that no architects or engineers be employed to study the changes beforehand. In fact, most residents who insist on hiring people to study the modifications and, if they’re advisable, recommend a sound plan to implement them are shouted down and accused of hating everyone who doesn’t like the building as it stands. Some were even threatened and fined by the HOA for questioning the mob of malcontents.

I’m no engineer, but even I know a building can’t continue to stand when you rip out parts of its foundation and destroy its cornerstone. A fresh coat of paint and new wallpaper looks nice, but that won’t support the weight of all the people who live here. Commonsense says we’ve got the makings of a real disaster. Using commonsense in our building can get you fined, though, so most people don’t speak up.

Meanwhile, the emotion-driven mob keeps smashing away with their hammers and crowbars, cheering every time they pry a brick out of the foundation. Then, they usually dance around telling the rest of us how much stronger the building is. Nobody wants to do it, but the rest of us need stand up to these bullies and make them stop. If not, we’re all going to have to find somewhere else to live.