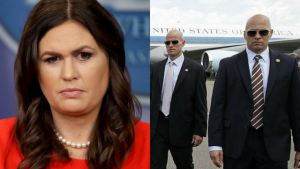 If you’re a big fan of Sarah Sanders, you were probably pretty annoyed to hear that she’d been kicked out of a Virginia restaurant simply for being Sarah Sanders.

Yes, small business owners have the right to serve whoever they want to and we sure hope that SCOTUS upholds this important Constitutional right on of these days, but it’s impossible to overlook the raging hypocrisy from anyone on the left who would kick a Republican out of their business but would surely support forcing a Christian to bake a cake.

That being said, the incident involving Sanders and the Red Hen restaurant in Lexington, Virginia is indicative of something much deeper than simple left-wing hypocrisy.

From Maxine Waters to the Red Hen owner to the protesters who yelled Kjersten Nielsen out of a Mexican restaurant last week, the left is signaling loudly and clearly that they’re perfectly happy to resort to incredibly uncivil, and even potentially violent measures to express their opposition to Trump administration policies.

And it’s getting kind of scary.

So at the very least, we can take a little comfort knowing the White House is prioritizing the safety of their staff.

From the Daily Wire:

Sanders has been the target of activist ire, like many Trump administration members, and last weekend was asked to leave the Red Hen, a restaurant in suburban Virginia, because the White House’s policies made some of the restaurant’s employees uncomfortable.

Sanders returned home after the incident, but according to her father, former Arkansas governor Mike Huckabee, a crowd, including the Red Hen’s owner, followed Sanders’ remaining family to a another restaurant and protested outside while Sanders’ family ate inside.

Sanders was classy enough to downplay the harassment she and her family faced last week, paving the way for Red Hen restaurant owner to act as though she too had behaved civilly and politely.

Turns out, that wasn’t the case.

Glad to hear that if unhinged leftists take it one step further, they’ll have the Secret Service to answer to.