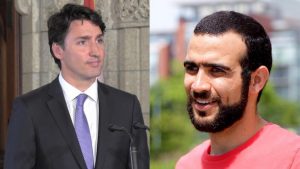 Now a free man, Khadr sued the Canadian government for violation of his rights. Trudeau and his leftist cronies defend the decision to not just apologize to the terrorist Khadr but back their words up with an $8 million settlement by saying it would be irresponsible to subject taxpayers to the cost of a lengthy trial. Also, Trudeau claims that the terrorist’s rights were, indeed, violated under Canada’s Charter of Rights and Freedoms. I haven’t read that august document, but I’d bet a major body part or even a vital organ that I wouldn’t be able to find a clause that outlines the right of a Canadian citizen to leave the country, take part in military operations against coalition forces that include Canadian troops, then return home to a hero’s welcome and millions of dollars. I might be wrong here, but I’m not.

Leftists claim that Khadr was only a child at the time, following instructions from his father. He was old enough to fight against the best equipped and trained soldiers in the world. He was old enough to effectively throw a hand-grenade. He was old enough to kill and maim. If he’s old enough to play, this terrorist is old enough to pay. That seems like a pretty simple concept, but it’s the simple things that elude the left. As far as the excuse that he was just acting on his father’s instructions, anybody who has told their teenager to do something knows that’s a bunch of bologna. Most kids won’t even clean their room or empty the trash without a fight, but this one jumped up and saluted when his dad told him to go take on the US Special Forces? He’s either the bravest son on the planet or the stupidest. Taryn and Tanner Speer probably wish like hell they had the opportunity to defy their father.

The reasoning behind Trudeau’s actions make him almost as reprehensible as Khadr. Barack Obama’s favorite protégé seemed to care little for the man Khadr killed or the one he injured. He was, however, outraged that a Canadian citizen’s rights might have been violated. He says those rights must be protected, “…even when it’s uncomfortable.” What Barry Obama, Jr. is saying here is that all Canadians will be afforded the full protection of the law, no matter what. That sounds pretty good, a noble and worthy goal. I have no problem with that.

What I have a problem with is treating a convicted terrorist who actively fought against his own country the same as a dumb kid who wasn’t questioned properly after he was arrested for robbing the liquor store. Khadr didn’t snatch a purse, beat up some jerk in a bar, or pass bad checks. He didn’t rob a bank, steal someone’s identity, or even kidnap a child. He carried out an act of war on an active battlefield.

He could easily have been killed or left for dead. The people he was defending and fighting for kill without mercy or even thought. They behead innocent victims on live TV and broadcast the carnage to the world. Mr. Khadr was taken to a hospital, given life-saving medical care, afforded religious privileges while detained at the Guantanamo Bay prison, and given a chance to defend himself and his actions in court. Every right he was given was something he fought to keep others from having.

When you take up arms against the men and women who have sworn to protect you with their lives, when you carry out violence against the hard-working people who pay exorbitant taxes for your education and healthcare, when you renounce the very laws being used to protect you and make you wealthy, you no longer deserve to be a citizen of that nation, and you don’t deserve its protections. The $8 million is a nice bonus. 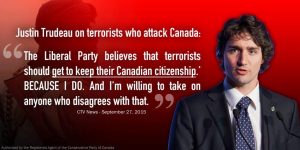