Is the Tide Turning in California? Surprise Nomination for GOP Candidate in Governor’s Race 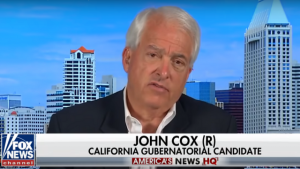 California is our nation’s most populous state, and while it appears to be packed to the brim with the most stereotypical leftists you can imagine, yesterday’s primary vote is telling a different tale.

While San Francisco and Los Angeles are notoriously deep blue, move away from the coast and you start to get a different story. Some call the Central Valley “California’s Bible belt”, and many of the towns, cities, and counties in Northern California, despite what you’d think what with all the pot, are quite politically conservative.

The unexpected conservative presence in California seems to have reared its head yesterday, particularly with the surprise nomination for the GOP candidate for governor, John Cox.

In what ranks as a big surprise, the primary in heavily Democratic California, where the top two candidates, no matter whether they are from the same party or not, proceed to the general election, saw Democratic Lieutenant Governor Gavin Newsom as one winner, while the other was GOP businessman John Cox.

Former Los Angeles Mayor Antonio Villaraigosa, who had been seen as a major threat to Newsom at the beginning of the campaign, was far behind the two leading vote getters, even trailing Republican Travis Allen. At 10 p.m. PST, Newsom had 34% of the voted, followed by Cox with 26%.

According to the Los Angeles Times, Cox spent $5 million on the race, while Newsom had raised $35.9 million. Cox was buoyed by an endorsement from President Trump:

You couldn’t sum up California’s current state in a simpler way: high tax and high crime. The state is overflowing with homelessness, they seem to have a new completely fascist bill in consideration every moment, and the middle class is leaving in droves as cost of living and taxes render the hard work of average income households practically useless.

It appears many in the Golden State are fed up with all the leftism and are looking to make a change. Great to see, California, keep pushing back against the agenda that is destroying a great state!